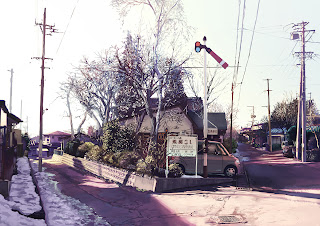 I had just come back from the time pane of Hisakawa-san's school festival of last year and I am now walking from the safest spot I could reappear from where I started time travel. Since I had to wear my summer uniform in that time pane so as to not look out of place, I am feeling now feeling freezing cold as it is now winter. I wish I had brought warm clothing along...

I have now certainly missed seeing my boyfriend as a girl, but I have to turn her back into a boy partly because of what I had just found out, and for the sake of me being able to marry him. What I had found out was that I was supposed to be born as a boy, but during mom's pregnancy of me, uncle used a machine of some sort that would turned me into a girl. I have been having visions of it since after graduating from middle school.

I would like to congratulate on the experiment being successful, but the idea of doing something to someone out of their will is wrong, especially when that someone is me. Too bad I had live too much as a girl since birth that I don't even know if I would want to live as a guy, let alone what it is like. However, I would rather turn my boyfriend back to a guy, who was turned into a girl not too long ago, than to me, who has never even lived as one before. Besides, he has a female clone of himself that he can control as though he is her anyway. All records and modified memories of people that know them would say that they are fraternal twins at birth.

As college entrance exams are nearing and me being in my third and final year of high school, should I even bother? If so, which college of where and what course? With my knowledge in chemistry and biology, and me working with my (mad) uncle at the hospital, I think a science course would be suitable. But what about accommodation, fees and.... gyaaa! Let go of me!

Someone grabbed a hold of me while I was deep in thought. They certainly caught me by surprise. I saw two men in white jackets that had certainly blend in with the snow on the ground. The style they are doing to me is the same as what my boyfriend's clone had went through, but due to the her body is structured, she can't be killed even though she really looks like she is at that time. Even Mamiko herself is surprised on finding that fact out: she thought that she was going to die after thugs stabbed her with a knife several times with blood stains all over, but finds her body to be back to normal, as though it never happened, and once those thugs had went away. However, does these two men holding me means that they gave up chasing her as they found out that she is impossible to die and now they are after me? Does that mean that I will actually die? Oh, no... I'm going to die, I'm too young, please don't kill me... I started to sob and cry as they torture me for no apparent reason. What did I ever do to agitate them? I can't think of any reason besides me working for my uncle's company and having a relationship with Hisakawa-san.

As I tried my fruitless struggle getting away, one of them unscrewed the cap of an unlabeled brown glass bottle commonly used for medicine. The man who had a hold of me forced open both of my eyes while the other seem to pour that liquid onto my eyes. That bottle contains too much liquid to be eye drops, but I know it can't be good. I tried to close my eyes, but the fingers that forced them open are too strong for me. Also, I can't even move my arms as they restrained them. I cried as I was forced to see something that I don't want to.

They poured the liquid onto both of my eyes and they are burning with pain. I don't know how much they poured, but the bottle is small, and I can hear it being smashed on the ground. Next thing I knew, they rapidly spun me in circles a lot of times and tossed me onto something. That was the last time I was able to see anything for the rest of my life: liquid of some sort from that bottle about to land onto my eyes.

Once I had recovered from that fall, now that the pain has subsided, I tried to open my eyes to see where I am.

Except that I can't. Huh?

I tried to force my eyelids open with my hands, but that doesn't work either. Hold on, where did my eyeballs go? I feel nothing but emptiness under my tightly sealed eyelids that now feels like the skin on the rest of my face. It's like there never was an opening for my eyes. Scraching there now feels like scratching chin. Oh no, don't tell me that I would be blind for the rest of my life! I'm not used to getting around blind. And with my eyes gone, anything that relies on it is now impossible or extremely hard. Except for the extreme case of entering someone else's body or the inability of obtaining nearby people's visions via telepathy, it's impossible for me to gain my vision back as the optical nerve of my eyes are badly damaged.

It's a good thing that I'm still alive now, but with my vision having nothing but pitch black now, it's hard to tell. Those thugs spun me around and threw me somewhere, so even though I have a good sense of direction, them throwing me here while I'm still dizzy made it useless. If only I could still see, this wouldn't be a problem.

The thought of now not being able to even do the simpliest things saddens me. I would rather be deaf or bound to a wheelchair than to become completely blind. There were no tears as the opening for what used to be my eyes, and the eyes itself, are now gone. Even my eyebrows are missing.

Get out of where? Why must I hurry? Where's that voice coming from? Why am I hearing a lot of voices shouting in the distance?

What's with the tone of the voices? They sound like I am in grave danger. I thought that those thugs who took my sight had ran away, so what now? There sounds to be a lot of people now.

At that moment, I hear the repeated bells that indicate an oncoming train, but it sounded that I am between the two sets of them. Oh no, I might be at the multiple train tracks that I might have seen in the area before they attacked me. The problem is which direction am I facing? If I don't get out in time, I could seriously die here! But which way is the way out??! I can't see!!! (Why do they assume that I can still see? I don't even know where "this way" is.) The loud sound of the crowd and the rail crossing alert bell seems to come in all directions. If I recall, the track is this wide and the crossing barrier is now down. So if I walk a certain distance and hope to hit the barrier, I know I would had reached safety. If not, I would have to turn 45 or 75 degrees, but can't even tell how much that is with my blindness and dizziness impairing me by a lot.

I hit a rail track. My guess is that safety is 90 degrees of its direction. Ah, safety zone, where are you? I don't want to die here! I can hear the trains quickly approaching! The surrounding crowd sounded more worried, and some exclaimed that I'm not going to make it. Ah, the position of the rail tracks tells me that I'm facing the right direction (I think), but how much further? The whole world seems larger when I can only see darkness. I can hear a train behind me, so I guess I'm safe. Ah, just a bit more....

[Author's note: Kotomi Miyazawa was killed by an oncomming high-speed train at that point.]