Showing posts from October, 2012
Show all

Improved features between Windows 7 and Windows 8

October 23, 2012
With Windows 8 releasing in less than a week, I feel that it would be appropriate to write this. Ever since the first preview of it ("Developer Preview") people have been kind of vocal about it mainly because of the start screen and the missing start button. People hating Windows 8 at this time is nothing new: people hated Windows 95 when it came out because of the completely revamped UI over previous versions (Windows 3.1), developers hated Windows 2000 for it not having DOS, people hated Windows XP for its "Fisher Price" interface that they either switch to the classic UI or stick to earlier versions (Windows 98, 2000) during its first years. If it weren't for the huge time gap between XP and Vista, Vista wouldn't be hated as much, though Windows 7 might have been hated too if Vista wasn't released first (technically, they are both the same). Most people don't look past the new interface, but the Windows 8 start screen really is the new desktop
Post a Comment
Read more

October 18, 2012
With my brother being magically turned into a girl from visiting Mizuho, the two of us looked like each other again just like in the old days, but how we are alike wasn't what I expected: as two young women instead of as two boys. It was right after the quake that I first saw him as a girl, though it was earlier that I first saw the picture of him as a girl on his student ID. I really thought it was someone else and wondered why the unknown girl used familiar terms to me and got angry when I tried to be polite. No matter how hard you try to look when he becomes a girl, you can't see him in any other way than as a real girl and an older version of me. No matter how hard I hit and shake his protruding chest, it simply jiggles around without ever falling off or going out of shape, and although it fells soft to touch, he showed discomfort as I touched them, which happens to me too when I touched mine. The sad part is that it can't be removed. Also, when I looked under his ski
Post a Comment
Read more 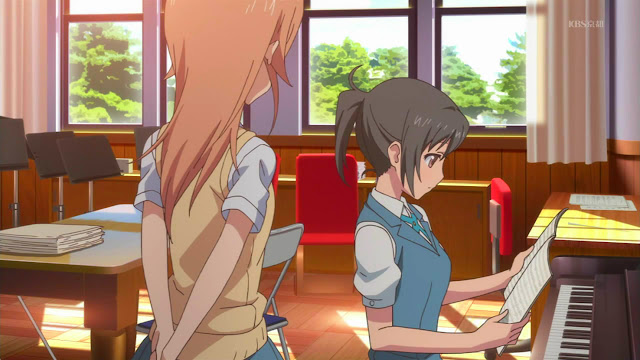 ( This is a repost from the anime blog ) Don't get me wrong, but Tari Tari is a 13-episode anime from the Summer 2012 season. It's so good that I would recommend you to watch it. What I'm writing here is pointing out hints how you would be disappointed that there won't be more of it. Based on a group of third year of senior high school students continue into college other than as a epilogue are uncommon starts in the summer before summer holidays In Japan, this means that it's around the 3rd or 4th month since the school year started Creation of a club made up of only 3rd years Late into the series, works to replace the school with a condominium began and stopped accepting new students for the following year spinoff that takes place at the school later is unlikely nobody make an anime at a place that has construction everywhere The anime started with people who just met each other, with one (Wein) being an exchange student from Austria (not Aus
1 comment
Read more
More posts