November 03, 2013
So you probably have a Twitter account or some social networking page that says about you to other people. However, there is more to just typing words and inserting images. 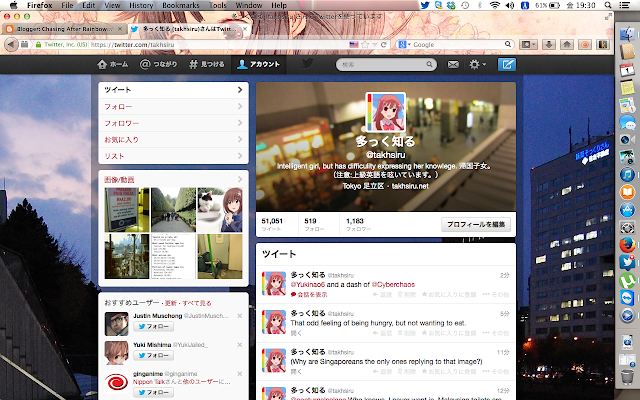 This is probably what an average person would see on their screen. As you can see, the interface would take up some space. More importantly, the whole bio should be visible in the remaining space, and leave some space around them. 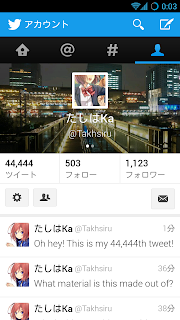 However, the view can look different if viewed on a mobile device and exclude some elements like profile background, along with possible extra steps to view everything. The banner image might not appear if viewed from a 3rd party app, or the mobile web version on non-smartphones. Keep this in mind as not everyone wants to view everything or viewing from something that doesn't show it.

If people are viewing your profile, along with several others at the same time, you would want to make it look appealing. This also means that the choice or words and images needs to look nice too. I don't claim to be an expert, but what I do with mine seem to attract people.

So here are the things to take note of:

Tweets
Not exactly part of the bio, but it is visible from the profile. People actually look at what you tweet (retweet and mentions too), particularly the recent ones. If it is filled with too much retweets, caption-less links to images, automatically generated tweets from places like YouTube, without any breathing room in between, that is not good. I have unfollowed people before because of this reason, and only because they flood my timeline. Who knows how many more that I failed to catch.

Depending on the person, they may also be particular on how often/little you tweet: too little and they may forget about you, or even not see your tweet if they follow a number of active people. If you tweet too much, your followers might see nothing but your tweets in their timeline.

Private account? There's a chance that they won't follow you just because they can't see your tweets, which includes mentions to them. Sure they can send a request to follow, but if they have a lot of other people to look through, and/or have past experience of private accounts they followed being not good, they would skip private accounts completely, possibly quickly too.

But why make it private in the first place? If it's because of spam, you are probably overreacting. If it's because you don't want certain people to see something, you should block them, or don't say it (at least not with that account).

Background Image
So you want to put some box that is like an extension of your bio as part of the background image? Bad news: not everyone views it in the same browser dimensions as you, which can be bigger than your screen. Even worse, it is not visible on non-PC web versions. However, you should have a background image anyway as it would make your profile look better. After all, it is the largest image visible on your profile, and if they see the default image, they may think that you are a boring person. The same goes for the banner image.

Recently, there is an option to choose if the transparent layer over the background (the gaps between each parts in the top screenshot) be either white or black, so you can pick which one is better, like black for a dark background image., and whether the image be positioned at the left, center, or right. Depending on the image and its size, having it tiled can be a good idea too. However, there is no option to change the horizontal positioning between top, middle, or bottom.

Banner Image
Kind of like background image, but behind just your profile image instead of the whole profile. You can choose what area to crop to and what level of zoom. Unlike backgrounds, it could also appear on mobile apps or mobile web for smartphones. You can try to align it with your display picture, but you wouldn't want to be exact with it as, for example, your alignment in the web version might not be the same in landscape mode of the iPad version. I know you might not use it, but this is about what other people see when they view yours.

Images and videos you tweet and retweet
This would say more of who you are, particularly to people that don't know you. Retweets with images do not appear on your profile unless you manual retweet them. If you tweet too much images at a time, particularly of a particular theme, it can turn people off and possible have them unfollow you just so their timeline isn't flooded with those. As of the time of writing, they have recently introduced a feature where image previews are visible without the need of expending. Not a good thing if your image tweets are questionable or even not-safe-for-work.

However, only supported sources would appear there. It is not clear what exactly these sources are, but these include YouTube, vimeo, twitpic, and so on. Some sources, like pixiv or tuippuru has the preview appear like a news article preview. Keep note that this may change over time, or even be excluded completely. Historically, this includes yfrog and instagram.
(Why? Well, Imageshack (company behind yfrog) services are getting more annoying to use lately, unusable if on a non-smartphone mobile device. As for instagram, probably because they have been bought over by rival Facebook)

Bio and website link
Try not to follow the crowd, avoid unnecessary details (like your age and gender), and keep it short and simple. After all, you can only enter a limited amount of characters in it. Also, avoid using hashtags or typing everything in caps.

For the link in your bio, try to link it to a place to where people who may be interested in you to know more, like your blog. And please do not use a link shorterner here: people may think you are a bot if you do. This link could also be one of the chances (probably the only chance if your account is private) if someone wants to find out more about you.

Personally, I would prefer that there would be no hashtags or links in your bio besides the website link next to the location field. Placing a link to a portal of where you would place all your other sites is not recommended: I wouldn't know which one to click, or not want to go the extra step just to find out more (keep in mind that there may be tabs of other people's profile in their browser), and not bother going further. I would if this was on the blog instead.

Location
You can enter the name of your town/city here, your GPS coordinates here, stuff like "Within the Whelm of Darkness ( ´Д`)σ)Д`)", or just leave it blank.

Take note: There are apps that tells you where your followers are from. Don't know if they get the information in this text field. Also, if you are entering a real location, be mindful that it is viewed from around the world, so people may not know what your two-letter US/Canada postal short-forms for the state means, and it could be mistaken as a short form of an another country in the world.
random twitter