(Note: this was written on day 29, so details might not be in detail until i have image reference. Day 11, and days 14 through 16, are currently skipped)

The last day in Venice, and also the first day (second if you count as transit to Paris) in London. Having a morning flight means that my time in Venice that day is just limited to travelling to the airport. The streets were empty, though as we got closer to the bus terminal (Plaza Roma), there are people walking around to get to work. Not clear which direction as Venice itself is a maze: even narrow passageways can be a major route with many possible routes, and random dead ends.

The Venice airport took quite a number of minutes to get to from the main city area. The interior looks like the kind I would expect of an European airport actually.

As Italy is part of the Schengen zone, flights to other European countries that are in that same zone would not need a passport (the UK is not part of that zone). It is not correct to say that Schengen is the same as Eurozone as not all EU countries are a part of it, and some non-EU countries are, including Switzerland. Immigration for flights to destinations outside that zone has a separate area. There's no shops inside that zone, so don't step into there until you are about to depart: there are no shops there.

The flight was about 3 hours long. People around me had that British accent. People whined when the pilot mentioned that the outside temperature was 13℃ on landing at London Gatwick airport, because it was 27℃ at Venice.
There were no underground trains from Gatwick, but there are National Rail trains from there to the middle of London. There are, however, many different options at different prices.

There's the (heavily advertised) Gatwick express, First Connect (formerly British Railways), and Network SouthEast. The last one was the cheapest. So, even among Network SouthEast, it terminates at different stations in London at (significantly different) prices: one at £14, another at £8. If you are coming from countries where the currency is weaker or on a tight budget, even £1 can mean a big difference to you. Which platform, carriage, and seat, are printed on the ticket. In this case, it's of any "standard" seat of any carriage.

Although the carriage are considered "standard" class, it feels like it's higher than that what I was expecting. Probably better that the Eurostar train.

So this station has the Northern Line and the Jubilee Line at the Underground station, but the station I'm headed to is Vauxhall on the Victoria Line.

On reaching, I kind of went around in circles looking for the place. Luckily, I have the offline cache of the map on my phone, though finding that street while offline is not easy since I can't search offline. (I can't use mobile data while overseas! It's too expensive!) Since there is only one hour difference between Venice and London, and having been already in Europe for 2 weeks, there is no real jet-lag.

After check-in to the hotel, I walked westward along a large river nearby and I notice a building that has strangely high security around it, and a lot of the England and Union Jack flags on the opposite side.

I don't know if it's because I had already been there during the random encounter, but I never went anywhere near the Big Ben again during the rest of my London trip. Since it was after nightfall when I saw it, I never saw it during the day up close. Does look nice at night though. 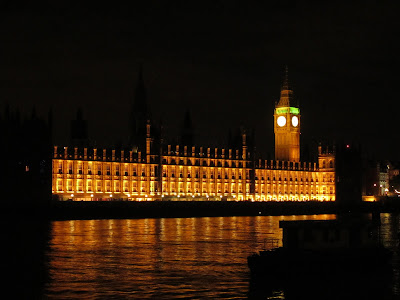 I visited some large 4/5 star hotel expecting to get a better view form what I could see from the outside, but I can't seem to find a way there. It's not everyday I enter a fancy hotel, so I hung around there for a while longer before walking back along the river, where I saw the Big Ben again, but on the other side of the river it is next to.
europe London travel Venice