August 16, 2019
I laid down on my bed after returning from a day at work, reflecting on the oddities of Yanagi's transformed body. She's like a living female mannequin of those well dressed store displays, but like those mannequins, she can't do anything to me no matter how much she wants to: her body is forcing her to not be able to look or interact with intimate parts of pre-transformed people like me. I can see her struggling to force herself to do it, but her body just refuses to respond. Similarly, I can't do anything to her because her body is rejecting me. She didn’t mean to turn me down, but her body isn't allowing her to look or handle non-evolved private bits. She's so desperate that she tried to look at porn, but because of the heavy involvement of what she's not allowed to see, it's like trying to read a heavily censored book where the uncensored bits are the more "tame" bits between sex scenes that make up less than a third of the content. It
Post a Comment
Read more

May 15, 2019
It’s been a few days since I’ve first met Yanagi. We exchanged messages daily to talk about things. It was the first thing I did so she knows I’m interested in getting to know her better. Her reply to my first message suggested that she wasn’t expecting it so soon, with the tone of the message, and time she took to type a response being disproportionately longer than what she eventually sent, I’m sensing she has some girl problems. I wasn’t sure if I was supposed to ask about it, but I know people won’t reveal their personal issues if not asked. Girls can be quite cryptic as they could say “I’m fine” while clearly agonising. Yanagi clearly has a room in her apartment dedicated to streaming with camera pointing at her and whatever’s behind, with the PC clearly custom built for gaming, but she never mentioned anything about what she does for a living. I suspected she may be streaming games to a popular gaming streaming service, but without even a username, finding her stream can be hard.
Post a Comment
Read more

April 22, 2019
Ever since that news report about the male celebrity being turned into a young lady, I've never heard of any new reports of cases like her since. I think that report made me see more people dressed like her at the places I deliver my parcels to. I don't know if they could be wearing other kinds of clothing, with as yet unknown conditions determining it, or if it affects regular women too. However, with Tokyo itself having a lot of offices where all the foreign and local big companies set up their headquarters, as well as a large population travelling around, people in office attire are everywhere. It is one of the first things I noticed when I moved from Sapporo. Office clothing certainly won't stand out here, even far away from Marunouchi, Tokyo's financial district. Blend in I would say, as the towns surrounding Tokyo are where people working inside live at, covering a huge area with a large population. However, in a large population city, what may seem like everyone
Post a Comment
Read more

April 05, 2019
Author's note: This is a work of fiction. This story does not take place in the same world as my earlier stories. ***** I awoke finding myself breathing heavily. I had a dream where I was helplessly falling from the sky and hit the ground of the courtyard next to my apartment, which woke me up. The details as to where I fell from or why I was falling escaped me faded away the more awake I felt. My name is Ichinomiya. I live by myself in a house that is as average you can get in the middle of Tokyo. This house belonged to mum before she married dad and moved to Sapporo, where I grew up, but mum never sold the house. She drops by if she has some business here or further west of the country. She does come here to use the Tokyo airports to travel out of the country if she can't book a direct flight from Sapporo, which only has flights to cities of surrounding countries. I moved here from Tokyo for university studies after high school. I wouldn't say I did well, but I
Post a Comment
Read more 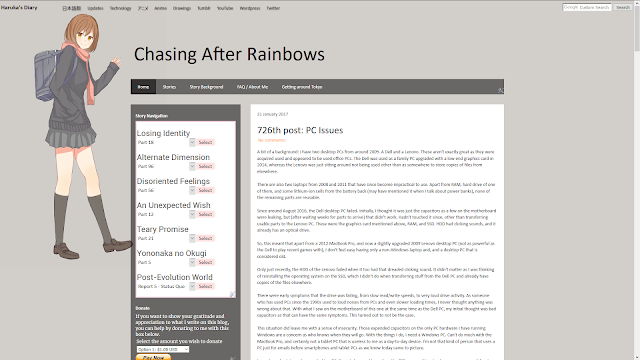