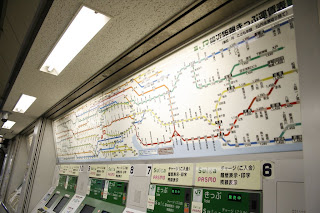 When traveling in a vehicle that is moving faster than 60 km/h, I would start to feel dizzy and/or have an unexplained feeling of fear. I would feel even more so if speeds exceed 125 km/h, especially when on a high-speed train or an airplane.
Speaking of airplanes, on my first flight ride some time ago as a reward for doing well at the end of middle school, I was excited. Despite being at that airport before, I never entered the transit area before. I didn't take any pictures then as we didn't have a decent working (digital) camera and we checked-in less than hour before it was due to depart. The security checks before entering the plane are not like what I have been through before. Mobile phones had to be switched off during the entire flight.
The time between entering the plane and it taking off seemed to take forever. Maybe it's because it a whole new experience, or maybe it's this fear of something going during flight. After all, I have read reports involving airplane crashes where people had died. I tightened the seatbelt as tight as I could comfortably.
As the plane was about to take off at the runway, it started accelerating very rapidly and then the front of the plane tilted upwards for some time until it leveled. During that time, I felt as though my body left me behind. I also noticed that the temperature inside the cabin was suddenly lower. During the flight in the air, it was okay I guess... 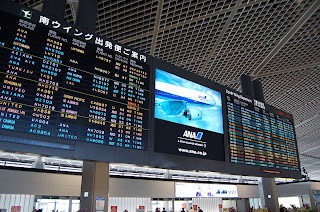 As the plane started to land, the plane seemed to move about wildly that I start to feel as though I am unwell, though not to the extent that I throw up... As the plane touched the ground, everything started wobbling madly for a while before it come to a stop. I don't know what's going on outside, but there seem to be some time gap between the time the plane landed and the time we get to enter the terminal building. I didn't feel safe since entering the plane, so entering the terminal building was a relief.
Airplane flights are kind of as scary as roller coaster rides.... but when going to far away places like New York, what choices do you have other than not going there?
Hmm, come to think of it, it reminds me of an anime I watched last year...