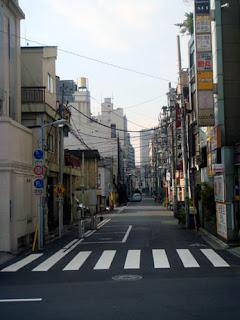 We stayed in the school until quite late at night to help around with some last minute preparations. I saw Saeko looking at me from the outside before disappearing into the crowd. I haven't seen Kenjiro since I was in my former class earlier. I saw most of his classmates walking out of the school gate around sunset along with most of the other students, so I guess he must have headed back home too. There's now only Kotomi's class and a few others that are still around, so the school is mostly deserted with the outside being dark now. Since Kotomi is not involved with the act herself and is somewhat emotionally unstable (after what happened earlier), she did not hang around too.

I noticed that most of those who stayed behind are third year students. I guess this could be the last time they would enjoy the festival as students and with many people they know as carefree people. That feeling seems to be missing in college and in the adult world, there are a lot of people you can't trust without them backstabbing or asking for something that may not be in your favor in return. Also, you might not see them again for a long time, if at all, after graduation. I have already experienced that too many times with primary and middle school graduations, especially the former as I was there for 6 long years. Too bad the technology back then meant that there was no instant messaging or social networking sites, and most did not have mobile phones or email. I think my parents and grandparents had it tougher, but at least they could talk to people in the village and know them well for a long time. Haven't seen my grandparents or visited their house since primary school. Wonder how they are doing? They seemed quite old the last I saw them.

It's starting to get really late that the last train home could come at any time now. Kenjio was waiting for me outside by the gate. He was waiting for me? My mind is mixed whether I should go to him or avoiding him, but he must have been there for hours if he really was waiting. Aww, does he like me? I feel bad for him. (Eh? What's with this trail of thoughts I'm having? It's completely different from when I was still studying in this school...)

Me: "Oh, Tanigawa-san. Were you waiting for me?"

I feel odd calling someone I know well formally, so is him calling me by my family name. But I'm still not used to "Mamiko" as my name (and, before becoming a clone, "Saeko") when I was used to be called as "Itsuki" all my life, which Kenjiro normally calls me as. I doubt he knows me as I am now, but what he knows about me from back then seem to turn into an affection for me. We were best friends, but it's strange to turn that relationship into that as a couple.

Kenjiro: "Hisakawa-san! Well I had forgotten something when I reached home and came back to take it. It was when I saw you walking here on the way out that I decided to wait for you."

You're lying! I saw you standing there since everyone had left in the early evening.

Me: "That's good to hear. So are you heading home now?"

Kenjiro: "I would like to, but to get there, I need to transfer across several lines as it's quite far away. The problem with going home now is that some of the lines might have ended operations by the time I reach one the transfer stations, which itself is still quite far from my home. What about you?"

I have a feeling he wants to stay over at my house and have that something with me.

Me: "Well, I would be alighting at [name of my station], so it's just a direct line from the station. You can stay at my house if you like to. My parents are working overseas for a long time, so no one but me is at home now. We better hurry before the last train leaves."

Ack! Why did I offer him to stay at my house and mention that no one is at home?!! I don't know how I can keep a clueless face while saying that, knowing what will happen.

Kenjiro: "Thank you! I would really appreciate your kind offer." 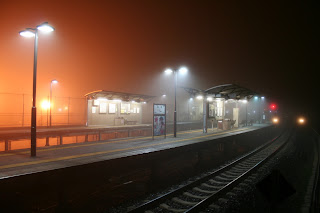 We reached the station near my house. There was hardly anyone there. I never head home this late, so I don't know if the station being this deserted is normal at this time. Because of that, along with the darkness of the place, I'm not sure if we are at the right station. The station signs and fixtures unique to the place tells me it is. The place outside the station is dark and dimly lit, so I am having trouble finding the way. For some reason, I started to tremble as though I feared something bad would happen.

Kenjiro: "Don't be afraid. I'm here with you. Just tell me which way it is."

I'm not afraid, but my body is forcing me with the feeling of fear. I normally ride my bike home from here, but Saeko cycled it home earlier... Also, should I let him know that I stay at the top of the tallest building visible from here? Since we are heading to my house anyway...

Me: "Well, it's across the bicycle park there, and then continue on through that narrow road around there. Then turn left at the T-junction with a convex mirror. From there, walk towards the tall buildings visible from there. I'll tell you more when we reach there."

On the way, we talked about what we did in the past. I don't know what we were talking about, especially the words that came out of my mouth. After navigating through the dimly-lit streets, we reached there. I ran towards the card reader and waited for him. For the fun of it, I entered the some numbers to let Saeko to open the doors instead of using the card with me. That should alert her that we are here and give her time to hide. I can't let her talk verbally with Kenjiro behind me, since she sound very much like me. Kenjiro did not see how I opened the entrance door. Due to the design of my house, it's possible to give visitors the impression that it's a regular apartment until they open the study hall door that looked that it might lead to the storeroom from the outside. That is, unless I use the entrance at the roof instead.

Kenjiro: "Oh? You're staying with your relatives here? This seems to be an expensive place to live in."

I thought I used the word "parents" earlier? Maybe he thinks I'm staying here because my parents are away.

Me: "Well, I guess you can say that. I myself don't feel comfortable staying in this kind of high-class places. Oh, the elevator that leads to my house is over there."

The speed the elevator was so quick that we reached at my level before we knew it. I don't like the feeling of my ears poping or the strong/weak gravitational force when riding this elevator. The only other alternative is the long, tiring stars or the helicopter.

Kenjiro: "I know I rarely take the elevator, but that one make me feel funny."

Wonder if he knows how high up we are. I opened the door and removed my shoes.

Me: "You can have whatever there is in the fridge and the snacks lying around in the kitchen. Feel free to sleep on the couch or my parents bedroom. I want to wash myself before heading to bed. Tanigawa-san?"

He's still standing outside looking at the name plate next to the door and kept referring to the view outside.

Kenjiro: "Hisakawa-san, this is your house, right? This expensive looking place at what seems to be the upper floors of this high-class-looking building."

I sense shock in his voice.

Me: "Erm, yes. I can prove that the things inside are mine, like that photo frame on the wall there of me and my parents."

Kenjiro: "So what are they working as?"

Good question. What are they working as? I don't know the answer to that myself.

Me: "Erm, let me take a shower now. I'm starting to smell awful."

I don't remember what happened next.