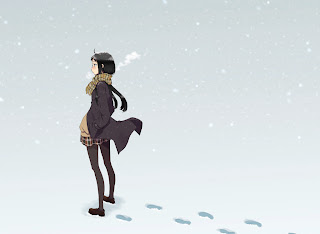 There's been a lot of things happening to me these days that's hard for me to manage without sacrificing one for an another. Yes, what I mentioned back in April still applies now.

Anime Lists
I'm aware that some 12-episode Autumn 2009 like 乃木坂春香の秘密 ぴゅあれっつぁ♪ (Haruka Nogizaka's Secret: Pleasure), 空中ブランコ (Sky Jump), and DARKER THAN BLACK -流星の双子 (Darker than Black: Gemini of the Meteor) has ended recently. Due to my lack of time mentioned earlier, I've completely committed anime whose storyline goes around nowhere or awfully slow. I would like to write a review of the 2009 anime (including 24-episode Autumn 2008 anime) quite soon. Hate to say this, but I've only watched a small fraction to know what the anime is about and even fewer that I didn't drop mid-way. There are odd cases where I like an anime I dropped earlier (Spring 2006 broadcast of Haruhi) and dropped more than once and/or after the entire series/season has ended (Setokai no Ichizon, White Album, Hayate no Gotoku). Looking at the Winter 2010, only Baka to Test to Shōkanjū, Sora no Woto, and Nodame Cantabile: Finale seemed to have attracted my attention. It's ironic that for Nodame, I've dropped the second season, but watched the live-action version that had the same storyline.

Free time
On top of the cold I'm having now (strangely,on my off days too since middle school), I never had a proper holiday since December 2005. Everything surrounding me is full of misery. Missing things by just a short moment and waiting a long time for the next, people being angry at me for something that doesn't go to their narrow-minded ways or wasn't even my fault to begin with and assume otherwise. To those who didn't know, my reaction time is slow, and I can't seem to apply what I know in actual use. One of them being my writing skills and communication skills are completely different: I can't seem to use difficult words when talking to people, but I could in writing. Sadly, since I can't think while under pressure, I also don't perform well in exams, but quite good during practice. I've not checked if it's true, but it feels that my intelligence level drops each time I fall ill or had my head banged against something hard enough to feel pain.

Others
There are so many things I want, and so many unwanted stuff I have lying around. The problem is that I'm undecided on throwing out stuff I don't use now (apart from the obvious trash). The urgency of doing this is that I'm lacking space and I mysteriously feel better outside the house, but sick again upon entering back, when I have a cold. There are mysterious bugs on the programs that I use that isn't suppose to happen, but it did. I've noticed that my early backup discs are having problems reading stuff, so I need to buy hard disks. The problem is how much do I need? A rough calculation says that if I were to use a 2.5TB drive, I would have about 10% of free space left. 2010 also means that, in the legal eyes, I would officially become an adult too, which is both a good and sad thing.

I would like to type more, but I don't have time now, so I should end here. It appears that I took almost 2 hours just to type all of this.
random