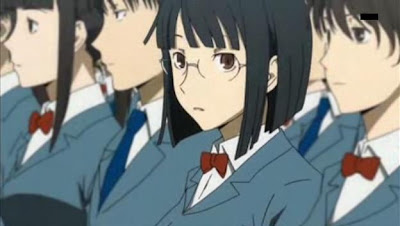 It's New Year's eve. There's simply too many things to do. The review of 2009 anime I mentioned about in the previous post (or was it a tweet?) is incomplete and it has not progressed between the time I started writing this post (31 Dec) and since I started on Sunday (27 Dec). I don't have the "must complete this by the midnight of New Year's day" urgency, but I don't want it to be done as late as February either. I know it's late, but I'm very busy with more important things (like work) at the moment. So busy that I can't even go online (My tweets come from mobile phone, as tagged by "from txt" on them), which is why you have seen me drop a lot of anime or did not pick up.

I've seen the trailers for the Winter 2010 anime. Although not much, it's enough to immediately spot anime that I would like. One of them is Durarara (top image), replacing Darker than Black: Comet of Gemini's timeslot. (The scene where a guy stomps on a mobile phone in front of girls is WTH? There's even a short display of a cardboard Holo from Spice and Wolf)

Speaking of trailers, all the anime produced by SHAFT (including Negima!? and Bakemonogatari) have this thing in common that, over time, I find annoying. Which means that I'm not likely to pick an anime from them in the future or has the OP/ED song done by a particular band. I've nothing against these two, just my personal preference.

Don't be surprised if I post the Winter lineup as late as March! LOL. (^O^)／
random