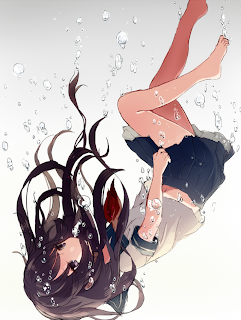 Nanami found herself in a white void where everything she looked seems to extend forever with nothing in sight. She couldn't even tell if she is standing or lying down as she can't feel the gravity and with nothing in her sight but the shadowless white void for reference. She's not sure if she could even move her body, if she had any.

Nanami is confused on what is happening around her. She knew she saw some rapid flashing green lights (in her home, not sure) not that long ago. The place is dead silent: not even the sound of a book being flipped, or any soft sounds. Is this silent, empty, and white, a place that everyone calls heaven? The last situation Nanami remembered certainly did not seem the kind that she would be killed in.

After a few moments of being in this white void, not being able to do anything, things materialized around her as if she was in a video game, except that it looks real and she could feel the things that appeared. The object in question was an unfamiliar office desk with her family photo in it. Judging by the other things on the drawers of the table, it looks like it could be her mom's office desk. Nanami has never visited her work office before, and most companies these days usually have security features that don't allow non-staff anywhere near there. Still, it's just the table itself that appeared, not the whole office it belongs to.

Suddenly, something she couldn't see spoke to her. There was no voice, as if what it wanted was directly communicated to her mind so there was no miscommunication in terms of what was said, but it spoke in ancient words that she had a hard time figuring out what it meant: even the language she knows well, but from a long time ago, seems like a completely different language to her.

Nanami sat on the desk as it was being explained to her about something as the white void changed to recreate the scene where she first found her family dead. Symbols unknown to Nanami appeared, but when she pressed one of it, the dark house became lit, or changing the whole place look like its in the day. Whatever these are for, the voice speaking to her head did not explain, or translate what the symbols meant.

One slider seem to make more children look older, and at the same time, the elderly look younger. She also hit what appears to be a checkbox next to it. Nothing appear to have changed when selected. Nanami decided to focus more on the settings and not look until she's done. She's tired of changing things and looking back and forth to see nothing has changed.Another slider appears to be inaccessible until the checkbox above it was checked. This time, there are two sliders and both are at the left instead of the usual center followed by options she could select only one of the three options, but she did not touch this setting. The next option, Nanami just randomly chose settings. If only she could understand what the symbols meant. She paid little attention to what she was doing until her blouse became so tight that she felt being squashed harder than in a packed train. She didn't know what setting she did that caused that to happen, so she freaked out and selected a bunch of options in hoping that one of it would "release" her. She skipped on to the next setting when that happened.

(Author's note: These settings that Nanami adjusted turns all humans into only female teenagers and young adults, which has already happened in Alternate Dimension and in the early stages in Disorientated Feelings. One of the settings Nanami did had delayed it from happening immediately to about 10 years later. This one is happening separately and differently from Mizuho Academy's methods. The scene of Nanami shortly before finding her family dead was the only scene in Nanami's recent memory where a huge range of age groups and genders are visible to effectively preview what settings Nanami did would change. Nanami could not read the alien language that was presented to her, and she assumed they were just visual settings of making the depressing scene that was presented to her to be more happier. Lighting and weather is the only setting Nanami adjusted that is only for the preview, and has no impact to the real world.)

When Nanami was done, she saw a group of happy high school girls running what appears to be her house. Nanami was too preoccupied in figuring out the alien symbols and fiddling around with settings, that she didn't pay attention to the changes the settings she made to the displayed scene. Nanami wasn't sure if this was an image editor or editing the past., but on the latter thought, she was hoping change to a scene before her family was killed, except that she couldn't even figure out the language the complicated instructions are in.

After Nanami was done editing, everything in her view, except herself, was reverted to the empty white void she was in earlier, before the scene of of being in a large penthouse appeared around her. Nanami is confused if this is an another computer generated scene, or if she is really back in her world? If it is the latter, why did Nanami see it being created like a video game scene that has its textures and polygons not fully loaded before she sees it? Is her own world and existence computer-generated in the first place? Is she still in that world of white void? Is what she's seeing being done remotely? Unfortunately, none of those questions could be answered.

It's evening outside, but she wasn't sure if time has frozen while she was away, or several days has passed.

For a house this big, it's surprisingly empty. Items that lay around suggests that two adults and a teenage girl lives here, with the belongings of the said girl being more prominent. Family photos aren't seen anywhere on display.

"Finally home... I feel like playing that game to relief my stress. Not being able to express anger isn't exactly helping in lowering my stress level."

Nanami heard a voice form behind a door. She wasn't sure what kind of game the voice was talking about: could be a board game, could be a game on her phone, could be an activity. It wasn't until the voice mentioned a title known for being a console game with enough violence to be given a rating for the age of 18 and above.  It then occurred to her that there is the console in question just in front of Nanami that is attached to the TV in the large room she is in. Just before she could even think of hiding, the person whose voice it belonged to appeared and saw Nanami in the room. Nanami thought she is in deep trouble for being there, but how is she going to explain that she just "spawned" there?