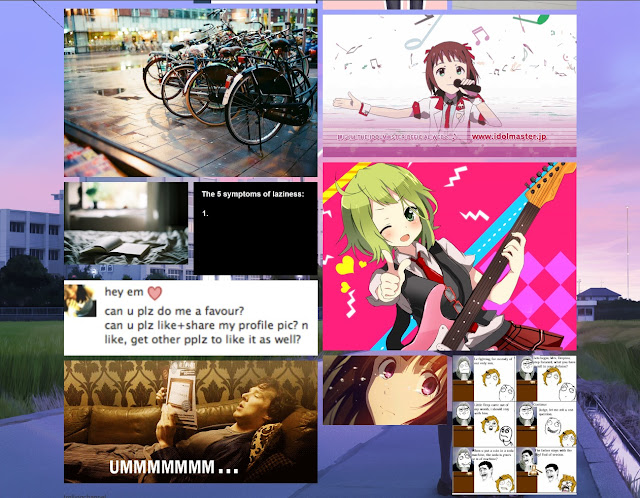 I have created a Tumblr blog somewhere in July, but never get around to announce its launch.

I have been aware of tumblr for quite some time prior to joining it but I didn't really know what it was about. I tried various themes and some modification of those to see how that would fit.

Layout
What you are seeing now is the third theme I have used that allows me to show multiple reposts at ones and auto-scale the images at random, but in the order I reblogged them, so that there is little wasted space. However, it doesn't handle video and audio well if they are not at the top.

The previous layout did allow me to manually adjust the size, and even as large as the whole screen or the original image size (whichever is smaller). The problem with that is that it only shows the first image of a photo set unless viewed individually.

I may change again due to the video / audio problem, but finding one that you can scroll without ever needing to click on a "next page" link and infinitely scrolling down until the very first post can be challenging.

Content
What do I put in here? Mostly reposts of what other people I'm following has  posted. Images I post to Instagram do appear here too. You could say it's an image-intensive version of this blog and is updated more frequent that this blog, but less frequent than twitter.
updates