September 30, 2012
With the overseas school trip behind us, I am hoping to put behind the bad memory of being very lost and crying about it behind. I try to remember the other things about the trip, but that scary moment of being lost is hard to mentally disassociate with the trip.

I wished I had not become so scared and frightened back then, but that was how I reacted naturally to the situation. Looking back, I should have been able to keep calm, but my body felt fear that became a part of my emotions before I was even able to think of keeping calm. You might have heard from my brother about how much we both look and think alike that we are practically twins, and how we eventually grew to be different. 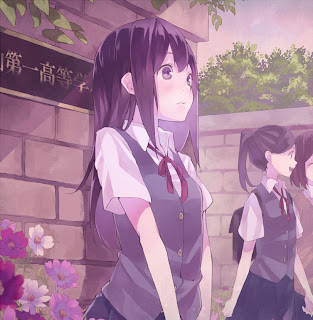 My current behavior is completely different from how I behaved when I was younger, and I'm very much aware of that. I don't like how girls behave, but the problem here is I am biologically a girl myself and there's some kind of unbreakable mental barrier that is forcing me to not be able to behave any other way.

How did this confusion with myself happen? You see, since before I knew anything, I was copying my brother in whatever he did. One day, our parents arrived home (at the capital city back then) from work, but they couldn't tell us apart because of how similar we are. I know enough about my brother to be able to answer questions by people who mistook me for him, and vice versa. Since there were no uniforms in primary school, it was quite easy to do so. It was because of this, I was brought up looking and thinking I was a boy and my brother's twin.


When I first saw my middle school uniform that mum bought for me, the first female clothing I wore, I thought mum was making fun of me as it was different from my brother's, who was also in the same school. As I saw myself as a boy back then, I was somewhat angry about why I have to cross-dress and how girly it looked, and how very different from the male version. It had the ribbon instead of a tie and had a skirt that is a lot shorter than the pants for the male version. My mum used whatever excuse to make me to wear them, including being able to hide things under my skirt and yet appear to not be hiding anything until they look underneath, which itself (according to mum) is a big social taboo. I don't remember how I ended up wearing it in the end, but I'm sure "because you are a girl" wasn't one of those reasons.

It wasn't until later that my body grew in completely different ways from my brother. I thought I had cancer growing at my chest, which get irritating and heavy while trying to move myself to the point that I wanted them removed badly: it's making everything I do uncomfortable. They made my old shirt tight and uncomfortable to wear even though they are of my size. The only clothing I felt comfortable wearing since then was only my school uniform... and female clothes that I'm reluctant to wear due to its feminine design, but those are now the only kind of clothes that best fits me and could wear comfortably.

I asked mum about it as she works at a hospital around middle school year 2 when they become quite obvious, but that was when she gave me the bad news: she told me that I am a girl and the "cancer" growing on my chest are actually breasts, which even mum has. She added that it would be abnormal for a female if I didn't develop breasts by the time I enter high school. Her assurance that it isn't life-threatening doesn't ease me either. That obviously means that I'm stuck with these weights for the rest of my life. It was also at this point that I started to see myself as a girl and surrendered to the feminine feelings that were growing stronger inside me, though I was hesitant about it. I guess it's hard to resist natural feelings.

How did I use the toilet if I didn't see myself as a girl until very recently? Ones in houses are mixed, and, in middle school, I observed that other students who wear the same uniform as me always enter the one with a red symbol with the shape of the skirt similar to what we are all wearing. I only saw it as toilet for people who wear skirts more than as a toilet for females only. I have to admit that I have entered the boys toilet before and even tried using the urinal (no such thing in the female toilet), but my body is not designed for it and forced to sit at the cubicle to be able to pee without making a mess, but the ones with the washlets installed, like at department stores, make me glad that I am a girl as I can clean my bottom easily without getting my hands dirty.

Over time, the female emotions developing inside me overwrote my behavior. I still know how I used to behave, but I am unable to behave like how I used to. Its like my behavior has degraded from that of a brave boy to a shy girl who gets emotional easily. I don't know how or why my behaviour has changed so dramatically when there are other girls older than me who still behave boisterously.

I am aware that there are many boys who stare at me, but I chose to ignore them because my tomboyish mind tells me that boys likes to look at pretty girls, which increases their self-morale or something. Being a girl myself means that I feel nothing when I see other girls and get attracted to boys. I would like to say that my tomboyish mind would have me feeling confused, but I never fell in love with anyone outside the family back then, and by the time I fall in love with Takuya, the female instincts had already taken over me. Although, the void left behind by Takuya's death left me blind on how to live on without him just how strong my love to him was. It's so strong that I actually went emotional about it and couldn't think rationally.