September 05, 2012
So much has happened since the last update that I have to split into multiple sections to make things clearer.

Story 1 (An Original Story By Me)

3 years since publishing Part 15 as the original ending, I did feel that the ending did see kind of abrupt. After watching the 2011 K-On! movie (which came out on Blu-Ray in mid-2012), I felt that I needed to insert something that is to do with graduation and yet feel the impact of it. All the newer stories I had written would not fit it well either because it's too early in the story's timeline to put that in, or the graduation idea was already used, which wasn't as impaction as what I am planning here. This story fits with that idea well, but the problem is that, with a 3 year gap between Part 15 and Part 16, my memories about the characters and setting might have become rusty. 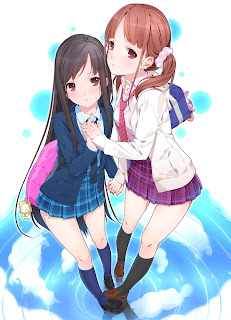 I mentioned something about "affecting the entire population" (everyone) being turned into schoolgirls. What is ambiguous about this is that I never mentioned to what extent this affects. The whole city, the whole country, or the entire world? Even I myself am not sure which to use. However, I did imply in Part 85 that the radius is quite big as I mentioned about the protagonist heading to the mountain ranges that is quite far away from the city where the story takes place in.

If you had read up to Part 50 of this, and Alternate Dimension (Part 86), note that this story is at a timeline earlier than Alternate Dimension (Part 86) as the latter had skipped ahead in time so that I can quickly get past to where this story might end due to Alternate Dimension's protagonist prolonged lifespan, and staying together with this story's protagonist. Story 2 and Story 3 would become nothing more than of the same story from different viewpoints if I don't diversify as both stories have already reached the point where they both married each other (sort of), have children, and live in the same house.

Even though the protagonist of this story has recovered from an illness that prevents her from knowing her own children that were born from her (the first two), no names were given to the children and are referred to by which order they are born in starting from the oldest. There are 4 children in total, with the second child being a boy, and the rest being girls, though the concurrent plot of this story and Alternate Dimension relating to gender change can make this confusing. To make things less confusing, I use male pronouns for the husband and son even though they have been turned into females, and explicitly say so if their gender has changed.

(Remember: Mizuho uniform would turn anyone into young females on being worn, even if they were an old man before wearing it, and turn back on removing it. However, removing the Mizuho uniform itself is difficult, and the uniform would try to brainwash the wearer into wanting to permanently become a young girl.)

Well, the last part was published in March 2010, which is just a few months after writing An Original Story By Me (Part 15) mentioned at the top. This story follows the cousin of Disorientated Feelings' protagonist whose parents and brother had been killed by a burglar shortly after she had left for school that day.

There's nothing wrong with the storyline, but it's somewhat difficult to write this as I can't really think what would happen next. When I try to think about it, ideas for Alternate Dimension and Disorientated Feelings came to my mind instead. I hope to continue writing this in some point in time. The timeframe for this is around when the protagonist of Story 3 just came back from her studies from abroad.

This story follows a girl trying to find new love, but is also struggling to let go thinking of her crush who had been killed by a devastating tidal wave that was caused by a strong earthquake (Based on the actual March 2011 event), and she herself narrowly escaping from being killed.

This story is set in a small town away from where stories 1-4 take place, but things get weirder when I subconsciously mentioned content from Story 2. Another story I hope to continue this: I might have more ideas for this than Story 4, which means that I could be writing this sooner. It wasn't my original intention to have gender bender topics in this story, but I guess writing Story 2 for a very long time does seep it into my thinking.

I couldn't help but notice that Saeko Hiskawa (protagonist of Alternate Dimension) and Mizuho Academy is mentioned quite a lot in all of my stories. It's like the protagonist of all stories do not know each other except Saeko Hisakawa, who is like the common person that all have. Not surprising considering the multiple roles and long lifespan she has.

Officially, I would publish new story parts when I feel like it, but unofficially, I do so towards the end of every second week. My twitter feeds would tell you what I'm up to that can affect me writing this even though I may not mention it directly.

You know, the process to write a gender-bender story of my own to whatever I like can get aroused myself when thinking of the content which, could either lead me to write what was on my mind in my arousal state, or delete that later on. Large chunks of text I might add.

My publishing rate is not as quick as what I would like it to be, but the very long individual parts does make up for it: the ones I wrote back in 2008/9 were a lot shorter than it is now.

As of the time of this post, I have already written some paragraphs of Disorientated Feelings (Part 51), with the urge to add more words to it, but I also have work-related things to worry about that can affect my thinking and availability to write them. Either way, I'm writing these stories in the first place as a way to write down my overflowing thoughts, and thank you for your comments (though there are hardly any) and support.
random story updates