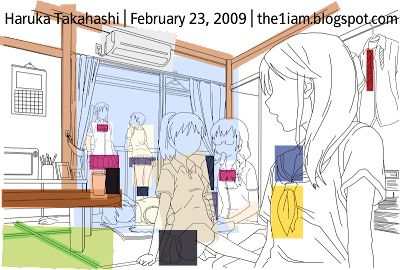 I started doing this right after doing v0065 on the 21st February 2009. Right now, I am almost done with the outline. Since the original is a monochrome image drawn by pencil, I had a hard time figuring out which are the shades and which are the outlines on top of multiple lines that could have otherwise be represented as only 1 line (eg. the tatami mat frames at the bottom left). I have also put up colours based on my judgment or earlier vectors at roughly at where they should be.

(Looks at the previous paragraph) Sorry, I got carried away. Anyways, looking at how complicated and how long I could take to release this, I may release several vectors numbered after this (v0066).

I'm posting this in the middle of the night, so I'm feeling tired and sleepy by now, so I shall end this here now. My arm are trembling now.