February 24, 2009
I was cleaning up one of my portable hard disk by searching for redundant files in a specific directory. Since I was using Vista, I can't use the search without entering part of the filename, which are somewhat random. So, I used a 1998 pc that has been gathering dust next to my Vista laptop that I normally use running XP's search engine. (It originally came with Windows 95, but for the sake of compatibility and stability, I had upgraded it.)

Since it's an old PC, and have USB 1.1 ports (only 2 at the back), it's painfully slow for the thumbnails to load. As I start to scroll through ~16000 files (scroll bar is only 1/4 down as I'm typing this) and waiting for it to load, I decided to try out the command prompt command I recently found out to copy/move files. Useful if the PC if you are using does not allow access to the system drive, but does not block access to command prompt.

I typed "dir/ah" at the root directory. The parts in bold are commands I discovered just this month and it would display the hidden files and folders you are currently at. Then I noticed a folder called "found.000" and "found.001". I managed to access those like a normal directory. In both I found another folder (and nothing else) called "dir0000.chk". Upon opening that, I found familiar image file names and the date of the file like below: 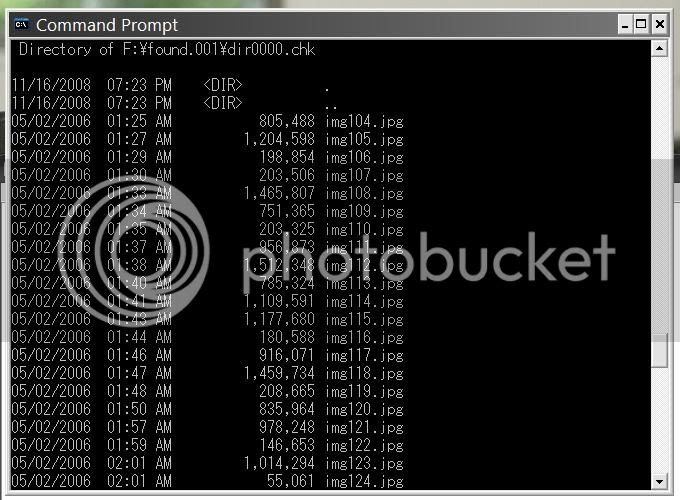 When I move those folders to a more accessible place, those files are indeed what I though they were and restored to their respective folders. Of course, some were junk files that someone use my drive a long time ago (3 years) and had forgotten about it that I deleted those.

I don't know how or when it happened, but it must have happened after or during October 2008, judging by the date of the files that were "found". I bought this portable HDD in mid/3q-2008.

I'm going to check on all the other drives on all PCs in the house to see if they have it too. So far, the Vista PC doesn't have any, including the older portable HDD bought in 2005.

Anonymous said…
Well, this is a bit late, but I'll vouch for windirstat as well ^^ It gives you a visual representation of the files on your drives and it's obvious if there are large duplicate files on the drive.
Tuesday, February 24, 2009 at 8:22:00 AM GMT+9

Anonymous said…
Oh, btw the *.chk files/folders are chkdsk recovered orphan files. Windows will initiate a chkdsk if there's some drive error/inconsistency (can be due to anything from improper disconnection to drive hardware problems). If you want to, you can manually initiate a chkdsk command in command prompt with parameters /f, or /r if you want to check for bad sectors as well.
Tuesday, February 24, 2009 at 8:32:00 AM GMT+9

Haruka Takahashi said…
well, this duplicates are of Jpeg files that rarely exceed a few hundred kilobytes in different folders, but same parent directory. So I'm not sure if windirstat helps. To make things more complicated, there are 15,000+ files (not counting images on the drive at other folders), along with several music and video files that ranges between 3MB and 900MB each.
Tuesday, February 24, 2009 at 12:02:00 PM GMT+9