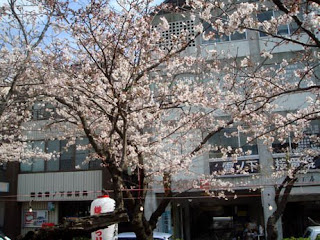 My cousin and I departed ways when we left the train station as we are in different schools. The large variety of uniforms of different schools has now been filtered down to only my school. Many students were walking by themselves, except those that somehow knew another. The blooming cherry blossom trees along the way makes the scene looks better and it represents a new start.

At the entrance, there was a vertical wooden sign placed on the ground and leaning on the wall to the right of the gate, decorated with some (fake) flowers as the border with the words "nth Entrance Ceremony" (第〇回入学式). The sign partially covered the name of my school.

The first years headed to the hall for the entrance ceremony. My seniors are looking at the noticeboard put up near the entrance of the building to see what class they are in. With some yells of excitement and disappointment. It was such a large crowd that I had a hard time getting past them.

In the hall, we were first arranged by class and then by gender. I don't know who came up with this arrangement, but it does look neat if viewed from above. The hall is unusually quiet as compared to my middle school graduation, but that is probably because people here have yet to know each other. The head teacher welcomed us, what he hopes to see us achieve, the rules and regulations, and so on.

Some time later, we headed to our classes and everyone randomly sat down at any unoccupied seat in silence. I sat down somewhere in the middle of the classroom, closer to the back door. However, this silence was broken when a lady who introduces herself as our homeroom teacher who would also be our Maths teacher. For some reason, she looked like she either had a huge personal problem now, dreaded to be a teacher, or her having to do this every year. She then has everyone to do the self-introduction by saying our name, name of middle school, and whatever else they want to talk about themselves, starting with a guy sitting at the front right. This means that my turn would be not long after everyone at his row is done. I don't know why, but feel rather calm in a situation that I would otherwise feel nervous, which is reflected on everyone else in the classroom, especially that first guy.

My turn soon arrived: I didn't know what I was saying as I just spoke whatever came to my mind without thinking, but it did sounded somewhat cheerful and seem to bring smiles to everyone, including the teacher. Even more so for the guys. I then sat down after the introduction just as the person in front of me did theirs. What did I say? Me related to someone famous? Scoring one of the highest grades for the entrance exam? A well made speech? Or was it because of my looks? How my own mind works is a mystery even to myself. I wasn't really paying attention to people who introduced themselves after me.

I felt that the girl who is sitting to my left has been staring at me since I sat next to her, so it's too great of an attention to ignore her. Once it was her turn, she introduces herself as Hiroko Kiyohara (清原弘子). That name sounds awfully familiar... Come to think of it, I think I did too see a face similar to hers from a long time ago. I thought hard, but could only come up with someone whom I played a lot with back in kindergarten. It's hard to tell, as everyone from back then and primary school (except the adults) looked and behaved differently, including myself. 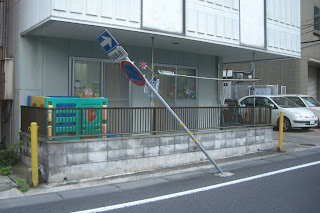 At the end of her turn, I asked her if we had met back then. She was startled when I started talking to her, but she did agree to me. She ask something very specific that only I would know: the location of the kindergarten and significant events that happened to us. I said what came to mind, but it is kind of difficult as it happened about one-third of my current age, where everything around me back then was still quite new and I wasn't as mature as I am now. Surprisingly, she said what I had mentioned was quite accurate and became friends, well, sort of.

As today is the first day, there wasn't really any teaching and were mostly of briefing of things like the rules and regulations, their expectations, and outline of what is to come. There was a long queue to the cafeteria stalls, but it's a good thing I had brought along the lunch box that mum prepared this morning filled with good food. Hiroko-chan looked over at my lunch box with envy as hers seemed rather plain compared to mine. Well, I do want to try something different once in a while, so I exchanged our meals. She seemed rather happy about it.

We walked towards the train station together. In the small shopping area around there, I spotted a shop that sells nice accessories. Hiroko seemed to be attracted to this shop too.

The fastest way to get to work, according to uncle, would be to board at the bus stop close to my cousin's school. But since I want to be with her for a bit longer, maybe I could take the train with her and then figure out on getting there. I called my cousin on the phone if she would like to tag along. Apparently, she got lost while wondering around her school, and just found out that the way out from her current location is quite far. That's why I don't like large schools. Looks like she can't join us for today. At least I get to see her at work or tomorrow morning.

After we made our purchase, we made our way to the train station and let her lead the way. The direction of the train we took was in the direction I would take to head home, but in the direction away from my workplace. We talked about the times we each had when we last saw each other. However, I found it sad that her mother was murdered when a supermarket in the city was taken over by terrorists just a few years ago. She was there to buy groceries when they held everyone at the store hostage. The whole incident lasted several hours when the police snipers shot them dead. However, during the time they took hostage, they shot dead some of the hostages and, unfortunately, her mother was one of them. She told me that her father has now married with another woman, but Hiroko can't get along well with her.

She cried on me as she was reminded of the incident but says that it's not my fault for her to do so. To tell you the truth, I know nothing of this incident as I was too young to remember and the news reports to me back then was too difficult for me to understand. I think I should ask someone like mum about this: They might know something.

Hiroko got off at a station of a small town when her sobbing stopped, but could still see tears from her eyes.. Except for those tall, expensive-looking, apartment complexes that are near-completion, visible in this area, I can't tell this place apart from other places. This place is some stops after mine.

It looks like I have to transfer to another line some stops down to get to the hospital. Going back in the opposite direction would take longer from here.