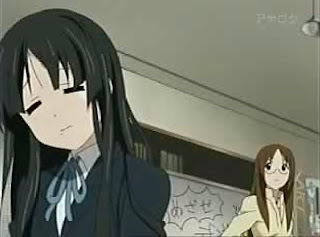 As I'm typing this I'm watching K-On! episode 6. Between 4am and 11pm earlier, I have written reviews of episode 2 and 3. I know it's overdue by 3-4 weeks as I had done that of episode 1 shortly after it came out. I have yet to cover episode 4 onwards. Since episode 2 review came out so late, screenshots of the widescreen version were used instead of the letterbox version that came out 23 days earlier.

Ah, the haunted house in this episode. I remember during the festival at my school: walking around in a dark, unfamiliar area with minimal lighting. There would also be people trying to scare me. But with no thanks to me being able to see well in the dark and the sense of knowing people are approaching me is not really scary. Need to blindfolded and be dragged there to be more effective. As for the food.... it's questionable.

How well I can see in the dark? Well, take any digital camera with the default settings and point to any scene at night and what I see captured on the screen is darker than what I see. Not convincing enough? I went through a place with a friend somewhere quite some time ago: although I can see something, she says she could see nothing but pitch black despite being at the same place. Speaking of abilities, I can still hear that "mosquito ringtone" with no difficulties that was the craze some time back somewhere.

The アナログ (analog) text you see at the top right of the screenshot? Well, from 24 July 2011 (2 years, 2 months, 2 weeks, and 2 days [no, really] from now), Japan would be switching off analog transmission on that day and would go purely digital. I think America is going through this phase now, so you can use that as a case study.

Ah, K-On! seems to have ended when I was typing the 3rd paragraph above. You might have seen me tweeting during the time they were performing. Here's the last screenshot I managed to capture before the ending: 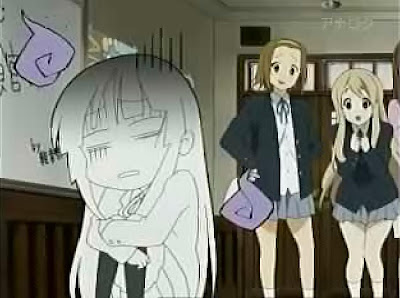 Of course, I would use better quality screenshots when I get around to doing this episode.
random