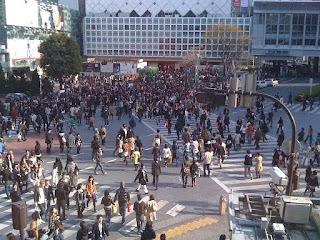 After a long day of exploring the capital, we headed back home with my new computer. I can't wait to try out this new computer. I had also bought a new mobile phone as the previous one looked quite old with the bi-directional navigation buttons and the monochrome screen. I also like the clamp-shell design and that small screen on the outside so I can check who's calling without opening the phone. Also helps preventing pressing keys by mistake: my friends kept complaining to me that I had called them but didn't say anything even though I didn't, except that the call logs said that I did. What a nightmare.

When reached home, the first thing I did was to put aside the old computer by disconnecting the wires and placed it on the floor. I notice that the area underneath where the old PC stood was dirty, so I had to clean that before placing the new one there. Since it's a mobile computer and not a desktop one, there are fewer wires to deal with. I carried the old computer to the storeroom without doing anything to it for the last time. There's nothing important in it, since the last I used it a long time ago. I don't want to use it now partly because it's too old to run the latest software. Ohh, the new notebook PC is shiny! I can switch between this OS and that OS whenever I turn it on. Of course, I have to do it myself. Let's see, I have to create a user account for both with a password, download updates, and all the other stuff. Oh, before I even connect to the internet for the first time with it, I should enable the firewall too. I wonder what programs can I make with it...


I don't know if I would care about this news, but the apartment complexes in the area where Hiroko and Itsuki live and work has just been completed. It looks quite nice from inside the train. I never thought it would look like that when it was under construction.
Anyways, Valentine's Day is just 10 days away, Friday February 4th. Oh, I don't know what to give to Itsuki... Speaking of him, he told me his parents came home the other day, but left again as they were posted to a job overseas. I headed to his class to pick him up and head home together, but I didn't see him there. His bag was at the table though.

Student A: "Oh? You're looking for Hisakawa-san, right? Our previous teacher brought him to the staff room or something to discuss about something. Something to do with his grades I heard. It's almost the end of our first school year."

Kenjiro: "Ah, I'm a close friend of his. From what I observe, his grades have been falling. He already barely manage to get into this school."

His grades have been falling? I though I had been teaching him all along, being the top scorer in school and his girlfriend... Was he too nervous during the exam to think?

The lecturing seem to be going on forever. I sat at a desk next to his and waited patiently. The sun was already starting to set when he reached back. From the window, I could see the sports clubs starting to store their equipment. Was it a long lecture? Being asked to do something as punishment? Or were there other people before him? I dare not ask because I fear it might make him feel worse when I do. Since I like him, I don't mind him asking me the same thing for a repeated number of times, unlike everyone else. 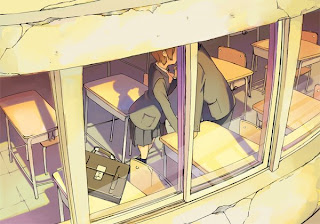 He wasn't expecting to see me in there, but was relieved when he did. He looked as though he's at the verge of crying.

Itsuki: "Ah, I tried my best and with your help, but my grades are still falling. The teachers said that if this trend continues, I might have to... have to... and... *sob*"

I can already see him crying, saying that he's sick of life. He must be feeling bad. I have to cheer him up before it gets worse. I kissed him on the lips as a hint that I like him. I can't get closer to him because my breasts are in the way and are already touching him. It became apparent that I am shorter than him. Then again, it's typical for girls to be slightly shorter than guys of the same age. It seems the opposite when I was in the latter part of primary school though.

Like magic, after I kissed, it seems that he has become more motivated. And somewhat more happier.


*****
My brother has managed to get into a private middle school. In terms of ranking, it's somewhere between mine and Aiko's academy. The academy is too large for him, and public schools don't really allow thinking out of the box. It may be good for those who aren't well with grades, but for someone in the family of smart people (except maybe my parents; I might have indirectly inherited my grandparent's genes via mom that was also passed to my uncle), it's not good and limits their abilities.

With me working and with uncle's help, our family expenses has been reduced and the slow change of old, almost-unusable, things being replaced with new ones. Did I mention that there's air conditioning in my room now? Well, I'll only need it if I feel too hot though. Of course, him already starting school there means that I have already started my second year.

I feel so happy with him now that I want to propose to Itsuki sometime this week. It's almost a year since we first met. I'm so exited! We had lunch at the rooftop earlier today and I look forward to more of it.

That evening, I called Shin'ichi over to my workplace to help our uncle to clean up the mess. Our uncle can't just call anyone due to sensitivity of the information of the scattered documents. A family member is more trustworthy than an employee who is an outsider that may unknowingly steal infomation and give to other companies or, worse, use for evil things.

It took us quite a while to get things done, but my cousin and uncle joined us when they were done with work, so that speed things up. However, even though with all that help, we were only done sometime past midnight. I could have called my other siblings, but they are not mature enough to help with the situation. In fact, they could do more harm by running around, yelling and screaming, and tearing stuff. I'm just exhausted.

I noticed that my head fells weird at some point in time when we were almost done with cleaning. I don't know what happened, but everyone in the room felt the same way at the same time. What is going on? It didn't seem like an earthquake, as nothing fell and broke, neither was the ground shaking. Why is my head the only one that felt it?

At that moment, my uncle received a call from someone informing that one of the candidates chosen from last year's programming convention was killed in an accident: He was in a taxi when a speeding truck crashed into it at a traffic intersection. My cousin recognized him as a classmate's childhood friend, who is currently in a coma somewhere in the hospital.

[Author's note: In case you haven't realized, this is the point where my first and second stories starts, with some parts indirectly mentioned above. Oh, and the valentine's special of the second story too.]
3rd Story scheduled story