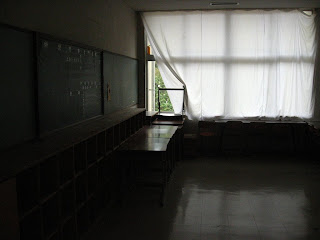 The preparations are taking some time to be prepared for some reason.

I don't know why, but the logistics does seem to be one of them. Also, the school does not want the festival to be held during or before my cousin's academy's festival to be held during or before my cousin's academy festival. They know that it's just a short distance away and by having it early means that fewer people would turn up. On top of that, my school could use this as an opportunity to relax and obtain ideas for the following year. My duty during the school festival is to help people who might require assistance and guide the guests around. I could tell that there will be a lot of people rushing around.

During preparations, I decided to bring out the old computer that I had pushed aside for my (then) new notebook PC back in November last year. I just realized that I did not backup my files from there and need to transfer them over to the new computer. It's a good thing that the old PC is backward-compatible with my removable storage drive. The connection interface back then was considered quite new, but few of the computers back then had it. There was also a lack of a local area network interface port to connect the computers together.

Let's see: plug it into the socket, switch it on, and wait until it finishes loading the desktop. This process could take a while. It's amazing how fast today's computer could do this.

I saw two icons on the desktop that I did not see the last I used this PC: a video and a folder. Both were positioned at the center of the desktop. I looked at the file properties and it said that it was created after school on my birthday last year, but the modified date is about 15 years into the future: double of what I had already lived through since birth! How on earth did the files get there? Recalling back, that weird principal in my school did say that a girl named Saeko Hisakawa who traveled from the future and transferred the files to my PC in a hurry as she might have heard the people who came to my house for the party.

Hold on... Saeko Hisakawa from a year into the future, and it happened almost a year ago, so...

That Saeko girl is my boyfriend??? Oh great, now what? The feeling of being attracted to is missing despite knowing that the girl is Itsuki. Strange...

How do I marry him? I need to find out how and why he turned into a girl and turn her back into a guy. And what's with the clone? I know the girl I talked to wasn't the person herself as I noticed a lag and the tone people only speak in when ill (and hard to pretend) despite looking perfectly fine. Either way, she was the one who saved me, but I should not ask her about it as that event might not have happened yet.

Since the computer is quite old, the video is not playable on it. In order to be able to, I would have to transfer it to the new computer just so I could play it. Maybe the folder that came with it too.

I don't get the video: it seems to be of a CCTV footage with train tracks, roads that run parallel to it, and a railroad crossing clearly visible. On top of that, it seems to be recorded on a December afternoon. The year of it, however, is... next year!

Curious on what the video is about, I continued on watching.

Nothing out of the ordinary happened until I saw myself entering into view. The odd part about it was that I was wearing the summer uniform in what obviously appears to be winter and can see myself shivering in the cold.

But why am I wearing it?

As though out of nowhere, two men who blended with the snowy ground suddenly pounced and restrained me, poured a bottle of something into both of my eyes, spun me around several times, pushed me into the middle of the tracks, and ran away. What was that for?

The video, however, continued on to show that I was in pain and had both hands on my eyes. I then saw the rail crossing barrier being lowered and I was still on the tracks, running around aimlessly in a panicked state. Why am I doing that?

Bystanders were shouting at me, which was when I noticed that both of my eyes were missing (WHAT?) and an oncoming train. Then...

I was hit by that train and laid there motionless with a lot of blood surrounding me. I look weird without my eyes, and was that running around aimlessly because I could no longer see anything? Come to think of it, I relied too much on my eyes to get around... Me being placed in a bag and the police cordoning of the area later on confirmed that I had died.

...I will die just like that? Lame, but not impossible. I don't know what to say. Am I going to die just like that in just next year? I think the fact that I had watched the video of my own death from the future might have caused some kind of time paradox as compared to not knowing anything until it actually happened. Heck, how would I know that the video I just watched has dramatically changed my future until it has happened? Still, will it happen no matter what I do? I can't tell, and it would be too late when I do.