January 21, 2008
I finally managed to secure my wireless internet connection (and changed the SSID). Until today, my wireless network was unsecure, so anyone could log in and access my home network (i disallowed the modyfying files over the network) and internet. I know because there are many wireless networks around my house and the DHCP Client List listed devices with unfamillar names. At one time, I saw 12 connections (i only have 3). Of course, in those days, I thought that setting the password for changing the router settings is the same as connecting to the router (not required if wired) and when I set the password (not knowing it was for the wrong thing), I wasn't able to connect to the internet or even access the router setup by wired that I had to manually reset it.

On the night before i enabled the security feature, before I turn all the PCs and router/modems off at 2/3 am, I noticed the "Internet" and "Wireless" indicator flashing, along with "Data" on my ADSL modem. I check all my PCs: none of them are downloading anything. I checked the devices that are connected to it (which I reseted barely a day ago) and saw someone's pc on that list. So, without any mercy, I turned it off without waiting for it to stop. I wanted to download something too, but I don't know what exactly that other person is downloading or doing. It could land our household into trouble if that freeloder did stuff against the law (like hoaxes) and the authorites blaming us.

Oh, by the way, if you are studying in ITE Bishan as at Jan 2008, you are probably wondering why there was no morning assembly from 15 Jan onwards. This is because the principals of College East and College Central switched places, with the former being the one who requested to "abolish" the morning assembly (Not "the spoilt PA system" or "unill further notice" as people say) so that "the SC should be involved in activities instead of daily duties". (I was the one who was raising the flag in the middle the day before btw) Also, they want us, the SC members, to "find out from the students" suggestions for the new uniform so that we are "able to distinguish those taking different courses" from the rest "as business students". (SC would wear something distinguishable from the rest) Of course, do let us know your suggestions us, especially Leon - 16th SC President. If there are no suggestions, it is likely to remain unchanged. If you as me, it would be those school uniforms that would be common in countries of East Asia. Suggestions so far include "wearing slippers"... (-_-)0 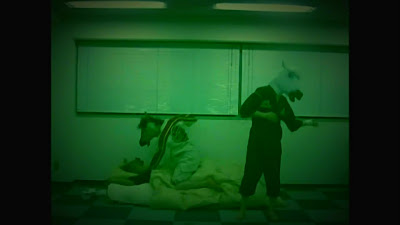 This horses thinggy video (in 4:3 on a show in 16:9) appeared after the opening and at the end of the episodes (well, first 3) of "H2O: Footprints in the Sand". Wonder what is this about. Come to think of it "Sayonara Zetsubou Sensei" (both Season 1 & 2) have references to stuff and weird things like the building clock with a face of some bald guy with glasses. Also, "Persona: Trinity Soul" ending have the main characters heads replaced with that of an animal, plant or bucket. "Rozario + Vampire" is kinda unconfortable for me to watch with the odd colours, monsters, large breasts and panties that I want to stop watching it. I already have a lot of anime to watch on Fridays and Sundays. At least "true tears" is better that "Tokimeki ~Only Love~", "Hitohira", "Otome wa Onee-sama/Boku ni Koi Shiteru" or "Happiness!" that I had watched previously since 2006. Probably more if you counted those that I never watch. I don't really have a fravorite anime in particular, but among those that I had watch, "The Meloncoly of Haruhi Suzumiya", "Code Geass: Leauch of the Rebellion" and "Clannad" seems to be the most popular.