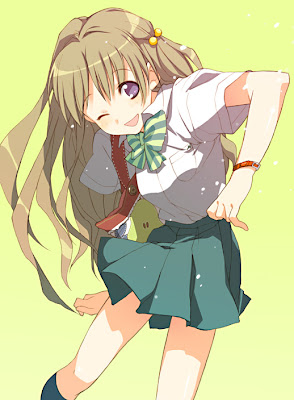 I'm aware that I haven't been (directly) talking much about my daily events, so here goes.

I woke up very early in the morning, so early that the the sun hasn't even risen yet. I got up out of bed despite the temptation to head back to sleep. I then went to freshen up followed by breakfast. The sun was rising when I left home.

I had always wanted to go to school by myself, but my parents keep insisting on sending me straight by car (since primary school), as usual.

En route, while navigating through the heavy traffic on the highway, my father would talk to me about cars and mostly stuff that I don't understand or not interested in.

Arrived in school about 45min before class starts (15min for the daily 生徒会 meeting). Today was one of the better days, apart from there being a test later in the day.

For the test though, I actually find it easy than the usual I-don't-know-how-to-do-this-but-will-do-anyway test. At lunch, despite it being crowded, I actually managed to find a place to sit down and eat.

Now, lessons have ended and am now waiting in the 生徒会 room, waiting for another meeting regarding next month's event. They say that it would be short.

Later in the day/week, I plan to get a new bankbook to replace my ageing (been using since 14 years ago) one that can't print on the last page. If you were wondering why it's taking that long to fill up, that's because there are hardly any transactions like once a month since September 1994. So imagine (22linesX10pagesX1transaction-per-month)/(no. of months between September 1994 and May 2008) and you would guess how slow it takes to fill up the book. The amount per month has rapidly increased since I deposited money that has been sitting around in my room and obtained an ATM card last year.

There is one near my house, but because banks mostly closes by 5pm and the time/distance in between, finding the time to get there without it closing/closed is difficult. (According to the bank's website, the bank located in a place known for electronic devices and another in a shopping district that foreigners would frequent in the downtown area that are located at one of the train stations that I would have to pass by, closes at 7pm)

With nothing to look forward on TV tonight, I think I should be able to sleep earlier and not be like so sleepy the following day.

Speaking of tomorrow, I would be busy helping with the Library to move a lot of stuff from the old location.

20:25 edit: Manage to reach the bank with less than an hour before closing time.