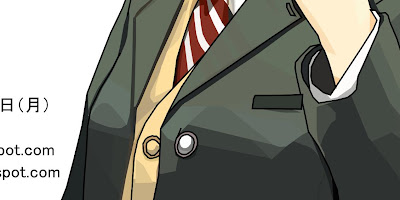 Lately, you might have noticed that since mid-July this year, I have used vectoring instead of drawings using the pencil.

The main reasons why I'm moving away from drawings is that it looks a lot better than the scans of the drawings and also, they take up far less space than the raster (non-vector) version. An average .svg (Scalable Vector Graphics; viewing the file is supported in Firefox in Safari) file would take about 200KB while the scanned version would take about 2MB, on top of creating a copy for editing and uploading that can get troublesome if I were to edit it later on. Of course, I didn't do vectoring without any prior knowledge about it. Here is one of my earliest known ones I have done one of that was made exactly 2 years ago:

Well, it isn't exactly vector because it was edited with Microsoft paint, but it was when I did the outline. It doesn't seem much here, but I had a nightmare editing the shoe and the bag as the resolution of the original was bad. Just doing the characters alone is difficult, but with additional characters combined with a detailed background would be a nightmare for me, even more if it's base on a real-life photograph combined with the above.

Obviously I have improved a lot since I first started and learn things like what to avoid, how to make "shortcuts" with vectoring and still look just as nice. Clothing is the easiest to do but the hair is one of the most complicated things to vector due to the amount of detail involved.

Note1: When exporting a vector image as a raster image in PNG, the areas that I didn't do anything to are cropped out until there is something somewhere along the x/y axis. The rest would become transparent. (Older browsers like IE6 would render those areas as white/blue-ish colours.)

Note2: As all of the images (except for the one at the very top of this post) are kinda old and are hosted on imageshack, you may face loading errors with them. Newer ones are hosted on Picasa, Flickr or Photobucket, depending on what the image is for. Other places like Friendster, imeem or Facebook have their image size reduced with no control over how they are resized.