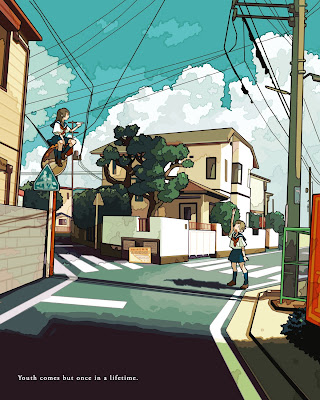 Lately, at the east main road near my house where I would usually alight at the bus stop when heading home from school via the airport, I noticed some guys with a hat normally found at construction sites running around that stretch on both sides of the road with an odd looking machine that seems to be digging through the ground beneath it.
I don't know what's going on, honestly. Based on what I know and the map with a 5KM radius around my house, it could be possible that a new subway line could pass through that road with those strange machines (my father says that they are "digging for gold/oil") to check the soil conditions as part of the planning and pre-construction procedures.
They are going to construct a station around there, but where exactly, I don't know yet. In any case, there is already a station west and another south (though further than the west) a short walk from my house.
Another one I would like to point out is the construction site near the station in the south. The sign outside says "construction of sewer tunnels", but it has been more than a decade and the map looks worn out and turn dark brown. I sometimes see people/vehicles inside, but there doesn't seem to be any progress.
From what I heard, the open field near the above mentioned area would have been a university, but the people behind it decided to withdraw not long after they started operations for some reason.