Showing posts from February, 2007
Show all

Since the EPSON STYLUS CX3700 device broke down due to my sister's sillyness which causes it to always jam the paper when it tries to print (and blames me for it for whatever reason when obiously she cauused the problem), I end up replacing it with HP Deskjet F370 (the paper loads from the front instead of the top as with all HP printers that i know of)

I'm not sure what is the dpi (dots per inch) of the one on the left was but I know it is lesser than the 300dpi image on the right. (Note: I …
Post a Comment
Read more

I bought the March 2007 (35th) issue of マジキュー at 紀伊國屋書店 (the one at Orchard Road; a major shopping district) for about S$23.80 (including 5% tax).
You may notice that the price on the front says 980円 (not sure if it includes tax), which is roughly equal to S$12, but considering the fact that I never been to 日本 before. At that time I was considering if I should buy volumes 3 & 4 of 魔法先生ネギま！ (they are about S$10 each although the back of the book says ￥390E. (What does the "E" mean? "Excluding tax"?). (edit: I found a square at the bottom left of the back which looks somethig like 本体９３３円)

Since most of the マジキュー (majikuu/magic) magazine pages (130 in total; each page is about the size of an A4 paper or more than 2 times in terms of area as compared to that of a manga page) is in full colour and but manga is small enough to fit in your pocket. In the end I decided to go with the マジキュー magazine. Inside was illustrations from anime related games / tv show etc. etc. …
Post a Comment
Read more 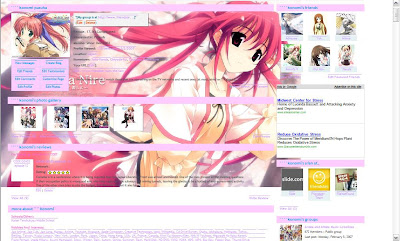 Here are screenshots (i was bored):
Screenshots are taken from Windows internet explorer (ver 7 for windows xp) at 75% zoom.


The point of these screenshots is that they are mine (i have another one but too lazy to upload a screenshot of it). The evidence is that there are the words edit on them. The 2nd screenshot is my main profile so that my friends would know me but i somehow got distracted and somehow became what it is. (The same goes for the 1st screenshot, which is older (the acc that is), but reached to a point of no return ;P)

By the way, I have recently been busy making subtitles. I type the text from an already subbed version by a group then add the subs to a raw (unedited; usually to a higher quality ver). The reason for doing it is the one subbed by a group have hardsubs (espically the opening/ending) and cannot be removed. Next, even if there are softsubs, the op and ed and some scenes is still in hard subs (for most groups these days. Exceptions (everything including op/ed,…
Post a Comment
Read more

Not long ago, at the end of the month, the numbers for one profile alone barely even reach 100. The irony is that the one with the highest views (asuna888) is my main profile and it accepts only people whom i am close with.

If you want to add me there, use haiqal1989@yahoo.co.jp (yes, with a .jp). However, if you know me well, use my Windows Live (MSN) messenger e-mail adress or use my (real) last name to the main account (asuna888). (Hint1: I think it is stated in white text in somewhere in one of my blogs and on my wikipedia userpage) (Hint2: アジス)
Post a Comment
Read more
More posts