Showing posts from December, 2011
Show all

December 30, 2011
Kotomi has made it clear that she doesn't want to be a housewife, contrary to what most woman usually do, but that's declining in recent years with many married couples. Well, this isn't exactly surprising to me as she seems to be the career woman, but relaxed enough to think about family. If she works at what she's interested in, she could do well in it. Although, working environment and treatment by co-workers are contributing factors. It seem that almost right after Kotomi said that she doesn't want to be a housewife on being married, Hatsuya as informed me and Itsuki that our working schedule might change. I was originally meant to do everything, but because my schedule includes being Mizuho student and Powell boss, which can't be changed, those times, including the buffer period around it, would have Itsuki or someone to take over. The children would have to be trained to not rely on their parents too much, but at the same time not doing it cruelly. May
Post a Comment
Read more 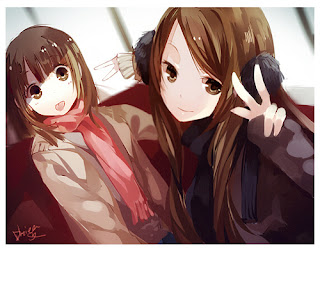 It's about 4-5 days after Christmas, and just another 2-3 days to New Year of 2012. I don't celebrate Christmas to begin with, and I now have a hectic schedule that everyday seems the same to me. With me hardly watching the TV or listening to the radio these days I never even heard any Christmas songs at all. On top of that, Christmas day falls on a Sunday, and it seems no different from any other weekend. In other words, Christmas is a non-even to me. I don't know if I would be up for the New Year countdown. You know, this is actually my first time in a long time that I'm not away, and actually at home. I brought this up because someone I followed on Twitter who is also following me said that I (or someone else named Haruka) am a bad girl for ignoring Christmas.
Post a Comment
Read more

December 23, 2011
If Hisakawa said that she had met my brother inside Mizuho, she must have known about his body changing. I mean, my brother and I go to the same school and, having seen a recent picture of me and my family (most likely the one taken during my entrance ceremony day last year), and knowing that me and my brother could look like the other if one of us tries to dress like one. I've seen my brother returning home directly from Mizuho, and if people saw him, they could easily mistake him as me in my school uniform, though he looks a bit different and I'm not well known enough on top of that for something to possibly happen. What I'm afraid of is not knowing if Hisakawa has already told my mother about it. Also, I knew I had the sense of familiarity when I first saw her on the plane, because she's the same person as the computer club president that I met at the Kamisugi High school festival. Her wearing a name tag that clearly reads as "Haneda Kanade" even though h
Post a Comment
Read more

December 13, 2011
It has been about a year since I had injected the solution made from some bits of me. Sure enough, my husband did become pregnant and gave birth to a healthy baby girl with no abnormalities. Since the presence of anything genetically male during the child's development being completely absent, it's not possible for the child to be a boy at all. This is my first child I could see with my own eyes: the children I gave birth too seemed to have gender-specific things appear censored to me for some odd reason, so I don't know if I have any sons. Now, I could actually know the name of the newborn child. Yuko (name of my husband in his female form) could see this child too. It would be a strange scene of two women having a child that resembles the both of them with no adult males involved. In this case, the mother of the child is the one who gave birth to it, which is my husband. It's can get confusing because the husband and wife (me) are each both a mother and father at th
2 comments
Read more

Dad, we don't need a car

December 12, 2011
Dad, I want you to sell the car instead of getting a new one for the following reasons: 1. Tax 2. Depreciation in car value over time 3. Maintence costs, including other expenses and inconviences that may happen because of it. 4. Cost of fuel rising and pollution it causes 4a. Calculating the cost per liter, and fuel consumption, it's already clear that a train fare of the same distance is less. 5. There is a direct train form the house to the workplace, and the time you head to, or leave from, work is within operation hours. 6. Parking and toll fees 7. I usually never hear you taking the public transport. Don't you see the expenses? You probably don't as total price per trip is not shown in your face. Can't you at least see the price of fuel and parking at least? I don't know how much more money there would be in the household as you had drove cars for about 15 years now, and a motorcycle for some number of years before you married mum.
Post a Comment
Read more

December 05, 2011
Quite some amount of time has passed since I found out about the big secret about me that even I didn't know about. My relationship with my children hasn't really changed since then, but the atmosphere with Itsuki does. I don't know if we are a married couple, or a group of friends hanging out together. I'm confused, especially when the family appears to be made up of three women, some children, but no men. Dig further and you would find out that those three women were previously men, but the children did come from one of them. Since then, I see gender differences as nothing more than the role played in making an offspring. Nothing more. Studying science since young, I know about this, but I never thought that it applies to me too, though it does help to be knowledgeable about my feelings and not let it take over me. I don't like wearing gender-specific clothes, but being a woman, the shape of my bust is permanently visible no matter what I wear. I don't like
Post a Comment
Read more
More posts