Showing posts from July, 2010
Show all

July 25, 2010
The unknown girl left hurriedly, but what shocked me the most was that she entered my house right in front of me. Me: "Hey wait! You trespasser! That's my house you know!" I caught strange girl by the hips. It wasn't hard as her reaction time was slow on top of me being stronger (from all that carrying at work) too. All of the girls from Mizuho seem to strangely have identical physical traits that makes them all appear identical unless you look closely. Saeko, seemed to have continued on to my parent's house with my children but not without making a face at the girl like they both know each other quite well. Saeko probably did not want my children to be involved in the argument. Me:  "Now, what dark magic did you use to make my children call you their father? I'm the mother and I have never seen you before." The girl gave up struggling and sighed.
Post a Comment
Read more

July 25, 2010
The sound of shop shutters being closed at night. That was the earliest clear memory I had. I remember that the place was the shops next to the train station and was being carried by my mother. This sound was the loudest I have ever heard back then that it made me cry. As to when exactly that was, I have no idea. I would say that was between 1990 and 1993. There are other memories as a baby, but I don't know if they are based on photos I saw later on, recorded dreams, imaginations, or what others told me. Odd ones include dad leaving to serve the army from mom's point of view, and me in a water bag with nothing but darkness around me. There was also me in a pram and being played with my older sister at the doorstep, drinking from a cup or bottle of milk that had a I-have-no-idea-what-it-is added for me to drink from, and even crawling under the blanket of the bed my parents were sleeping in.
Post a Comment
Read more 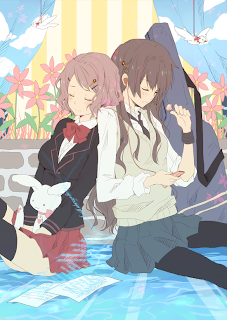 We walked around the entire building when Saeko, without warning, stopped to unlock a door that is doesn't seem to stand out from the other rooms there except for the words on the sign. The room appears to be where things like stationery and old documents are kept. I don't know how old the stationary are as they seemed to be in mint condition, but the design of the packaging looks old. It feels strange to see something that is old as when brand new, though it is possible for the manufacturer to not change after all the years, particularly ones made overseas. Saeko: "I have asked some employees that I've known from my Kamisugi High days to come here for help. They are on the way here from the research departments now." She went searching through documents, theories, research, and sketches that are handwritten dating to some months before I entered university in America. I could actually recognize some of them. They had Saeko's handwriting with her name on
Post a Comment
Read more

My 21st birthday less than a month away and how times seem to have passed. My memories before 2006 weren't clear: probably the trauma I had that year that had the old me placed aside. My stress level was so high that my mind couldn't handle it and probably made me forget things. I don't even remember anything from kindergarten and primary school other than what the place looked like. I don't remember the names or faces I've met. What I've learn has so much become a part of me (languages, etc.) that I kind of forgot where and how I learn it. My coming-of-age-day was just earlier last month, and my mind is saying that it's still winter even though the heavy rain and the hot weather of summer. It's like the time has been fast-forwarded. Coming across a (64MB) memory card that had media relating to Spring 2007 anime, I realized that it was from more than a year ago. I was thinking that it's still 2007 or 2008, but it's already halfway through 201
Post a Comment
Read more

Walking along the street, I thought about the course of action that I should take. It might not seem hard at a glance, but the chain reaction as a cause of it should be taken into account too, which is a complicated thing to predict. Before I knew it, a group of foreigners who were looking at the city map stopped me to ask for directions as I was the only person around they could ask. I wonder where they are from? They look foreign, but they don't seem to be from western countries either. It seems that they are trying to visit a house of someone they know who was sent here for work reasons. However, only the address in Latin characters were given and nothing else except the phone number, which is of a mobile phone. The address system in Japan can be quite confusing, even to the locals, without a map. To make matters worse, all of the signs that mark the posting areas and maps of the city like the one they are looking at, contain only Japanese text. Even the order the address is w
Post a Comment
Read more
More posts