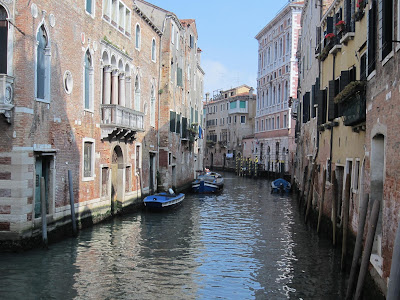 Second day in Venice. Went to the supermarket to buy more food supplies, and walking through the streets that range from being at the two sides of the river, to random dark and narrow pathway that oddly has a lot of people walking through it. As if encountered by accident, I stumbled upon Iuav University of Venice (Università Iuav di Venezia; IUAV), probably the only college there.

There are so many things about this city that you can't find elsewhere: plenty of old buildings that are older than most buildings that I know of, the lack of roads (which also means the absence of things associated with vehicles) and having boats in their place, houses that are that close to the water as you can see in pictures (and the algae markings visible). Partly because of how long ago the buildings were built, and their conservation status, it's hard to tell if buildings are shops, houses, schools, offices, and so on, at a glance. The only areas where buildings of modern times are seen are in the area where the station I arrived at is located (which is also where the bus terminal to the mainland are, including the airport) and the outlying islands that are designed to look like the older Venice buildings, but distinct enough to tell that it's new. I saw a construction zone and a demolished site on one of those islands.

If you were to look carefully at the walls, you can see how high the flooding in Venice can reach, which is not surprising considering how low the average street level is to the water, but the increasing frequency and height is a worrying concern.

Without a map, I walked around along the main streets hoping to find a binale site. Eventually, I came across one, which is an exhibit of dead bats, cocoons, and not much other stuff. However, it was also there that I found out where the main venue is, which is at two separate locations. Both are quite far from the place I stayed at. 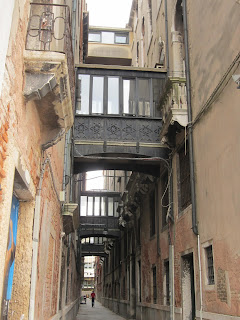 So what else is there? Well, we decided to wander around aimlessly. Probably areas far away from where most tourists would probably not go to. I came across a jetty where the gondolas that Venice is known for are parked at. Jetty is designed in a way that you would have to navigate through the confusing paths to get to, even though the waterway itself is a major waterway.

Along the way, I noticed that some doors are sealed up for some reason. An obvious way to tell is that the numbers that usually appear above the doors appeared above a wall, though it's obvious that, by looking at it, there was a door there. Some units has (apparently older) roman numerals carved at the top of the door archway. The newer numbering seems to be a unique number across the whole of Venice except its outlying islands.

Then we came across a courtyard-like place with a unit that seemed to have its door decayed badly. On its window, I could find some sand-like particles at the edges of the window that looked like something you would find at the beach. This is the strongest sign of how high the floods in Venice could go. Looking into the window, it is clear that the place seems to have been abandoned for a while, as I could see flood-damaged items (and flood lines on some) inside.

Along the way back, I saw two black cats. Cats are rarely seen during the time in Europe at that point in time, and these two seemed to belong to someone. These cats quickly wandered away, as if running away from me. I don't know why, but something made me want to follow those cats. 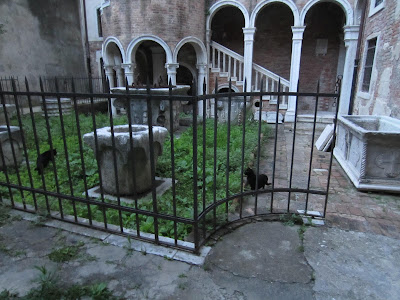 So the cats bring me to some strange area surrounded by buildings where there are more similar looking cats hanging around. This area is out of the way for most people.

I wanted to get closer to the building and those cats, but it's fenced up with a locked gate. (Photo you see on the right is taken through the gaps in the fence.)

It was sunset at that time, so, I left when it got dark. I saw light reflecting off the cat's eyes as I leave.

Now, how do I find my way back. In fact, where exactly am I? The place is not that well lit.

If it weren't for my phone's GPS and an offline cache, I would have been completely lost. Having signs pointing to some major places in Venice that are close to my place or in the general direction of it.

The quiet streets with close shops and nobody around is kind of scary though. 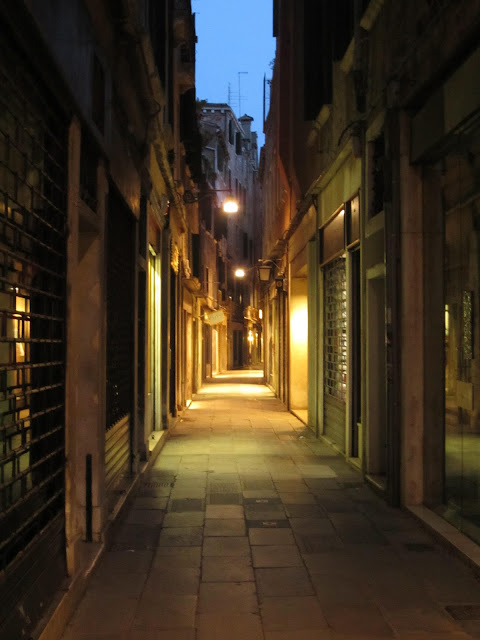