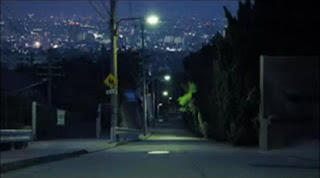 As I walked down the street with my bike on my way home, I felt as though someone with an evil intention in mind to harm me was closely following from behind. I continued walking on, pretending as though I was not aware of it. I don't know how to get rid the idiots with as little harm to me as possible, but somehow, I don't even feel scared about it even though my body says otherwise.

I reached the dark and quiet part of the route: the lights were dim and the nearest house is some distance away. As expected, two men grabbed a hold of me from behind: one was holding me tightly with one hand covering my mouth, with another holding a kitchen knife. He was also looking for something to rob me of and touched parts my body I forgotten I had that made me feel uncomfortable and scared (though unusually pleasing). Even though I knew that it would be useless, my natural reaction would be to struggle and scream for help. Although I saw this coming, I didn't know how to counter it. I closed my eyes, hoping that all of this would be over soon.

Opening my eyes later on, I found myself to be in a classroom, sitting on the side where the doors are with stuff on the table in front of me. Looking at the time, it seems that homeroom session was about to start as my classmates rushing back to their seats. However, the date on the blackboard says that it's Friday, 4th February, which is a few months ago and obviously mean that it's winter where it would be quite cold. Have I somewhat travel back in time? If so, how did I do it? Well, obviously whatever happened on that day did not happen to me before as I was from a different dimension where I am in a completely different school and class.

The teacher walked in holding an odd-looking doll that seem to have origins either in the remote areas of either South America or Africa. He said that he bought it while on holiday in one of these places recently. The teacher was having a play with the doll with a comedy theme. As he was doing so, I noticed something odd: the eyes seem to be fixed in a direction as he was moving the doll about. One of the eyes was pointing at a girl sitting on the opposite end of the class from me, who appears to have her hands clenched together against her forehead.

As when what seemed like the teacher was almost done, the room was suddenly filled with a bright green light and the girl whom I saw earlier had fallen down sideways in the same position. Everyone, including myself, rushed to her and asked if she's alright (they all call her "Kobayashi-san"), but she doesn't seem to respond and remained in the same position as earlier. On closer look, she appears to be trying her hardest to move her body and wanting to say something, but failed to do so. Nagisa and I shouted around for help. Some time later, an ambulance arrived and this "Kobayashi-san" was sent to the hospital. Come to think of it, was the person Nagisa at Saturday, 14th May was referring to is her? Also, what was that doll? In any case, I was suddenly dragged back to the time I was from. 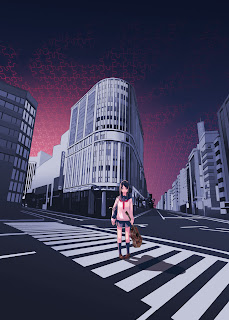 Looking around, I saw a girl in the distance being held up against her will (I keep forgetting that she's me) being raped by two guys whom I knew as thr bad guys that want to steal stuff from the company I'm working at for evil intentions beyond my imagination. I took a picture of the incident in front of me in such a way that won't alert them and use it as evidence. It would be quite strange to say that I took it when obviously I'm the victim in the picture. There was a flash of white light from the girl's wrist before she suddenly vanishes into thin air. This scene looks awfully familiar...

At that instant, the two men became shocked and ran away in fear as though they had seen a ghost. Wow, not only can I physically change myself, I can also travel through time (and witness all of these happening from a 3rd person point of view). Was it because of this device on my wrist? What other abilities does it have? Since the earlier ones happened quite randomly and not knowing how it happened, who knows what and when it would be.

I picked up my bicycle from right next to the spot where I saw myself vanishing into thin air and continued on my way home. There's got to be a safer way to get home than this... In any case, it's been a long day with too many strange things happening to me today. I really could do with some heavy sleep.

When I travelled back to the present, I have this feeling that the strange doll I had seen earlier was with me, but it's not with me now...

At the entrance to the elevator, I noticed that the floor I stayed on is the largest floor number. I also noticed that there is also a "R" button there. I decided to go there and have a look.

When I reached the roof, what I saw was breathtaking: I could see the houses and the mountains in the horizon. The only obstruction is this penthouse sitting smack in the middle that seem to be a floor higher. From what I can see, there are lights from a pool and a small private elevator there. Aww... I bet they have a better view there and enjoy the breeze while swimming... Wait... what is this door?

I saw a door hidden by a maze of some sort on the side furthest away from the elevator. For some reason, it has the exact same number as my house. I inserted the key and it unlocked with no difficulties. Huh? You mean this penthouse is my home?

I got inside, but I don't see the things I saw this morning. Maybe I'm at a part I never been before. I went up the stairs, and indeed, I saw the pool I thought I saw from earlier. This place is too nicely designed and large to call my house, except that it is now. The private elevator is surrounded by the stairs. So when I got to the bottom, I found myself at the upper deck of one of the rooms I had entered earlier while searching for my stuff with dim lighting that I didn't pay attention to how big and beautiful the place is, not to mention the good view out of the window. I noticed that there is also a bathroom with a bathtub at a corner where I can take a bath with fresh air and a nice view and still have privacy. And it's my house???