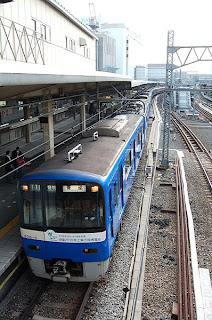 The following Monday, 16 May, came. I went to check out my other house I was living in as a guy along the way. The house now appears to be occupied by someone else for a long time, seeing that the family name plate at the gate looks old and is not of anyone I know. I knew this kind of thing would happen as, my history in this dimension between the time I was born and now is completely different from what I have experienced.

In class, I had somehow became the de facto class representative. When the first teacher of the day comes in, I had to give the signal to stand, bow, and then sit back down. How did I become one anyway? Well, I might probably know the answer to that: I had scored one of the highest in the entire school and most of the guys in class appear to have a smile on their faces and then began drifting into their own world when they see me. I headed to my seat, giggling, when I saw their faces.

When Nagisa walked into the classroom, she appeared to have a big smile on her face and shouted out loudly to everyone that someone by the name of "Haruna-chan" had woken up from her coma and would be back as soon as next week. People who were in the same class back in February (the previous school year) got all excited.

Um, who's that? That was on my mind when she said that name. The sitting arrangement posted at the notice board on the wall did not have her name mentioned, though there were several unallocated seats in the classroom.

During break, I joined a group of friends who appeared to know me well and walked about the massive campus. The high school section is nearest to the main gate. The campus is so massive that who knows what hidden "treasures" lying around we would come across.

We walked around aimlessly at some unknown section of the campus and randomly open the doors that are not occupied. What we found are either completely empty, a closet, a staircase or lift lobby, an eerily silent dark room without lights or windows, and rooms that, apart from the thick layer of dust and rust, looks as though I had stepped back in time. Strangely enough, there was also an unmarked room filled with mountains of everything that could be found at a large supermarket. The items appear to have been used and are sorted by the type of thing. There was also a sign saying to donate or take anything we want in the room for free. There was also a room that is filled with stuff I would see at work. Lots of strange rooms there...

We looked at the time and realized that lunch break was almost over and headed back to class. Fortunately, there are directional signs and maps located throughout the campus.

Almost a week has passed without anything significant happening, unless you count me receiving my work pass with my female face and name. I still can't believe that the girl photo in there is even me. Well, even though anything I do in this female body is second-nature, the sense of strangeness when I do things that only girls would do still lingers. Though I somewhat like it. 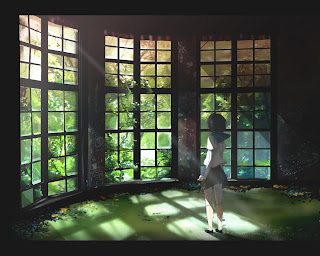 Since my parents are overseas, I would have to prepare meals for myself everyday. Well, normally I would eat instant noodles or buy snacks from shops, but since last Saturday, I have suddenly gain the ability to cook delicious meals myself. Tonight's meal is curry rice.

After eating and cleaning up, I went to check for assignments: It seems that it's already done. Out of boredom, I went to a forum-like site where everyone seems to go by the name "Anonymous". Looking around, there seems to be topics that a website belonging to a guy named Kenneth Tan, who was killed last Friday, being updated a while ago by what seems to have been made by the person in question. The link to the site was also provided with warnings around it saying that it is haunted.

Last Friday? Come to think of it, I do recall seeing a newspaper report of someone like that in the newspapers the day after. I clicked on the link and saw the following post:

For the past two weeks, I have been through a lot of things. A lot of work was given to me, along with tight deadlines. The boss is very particular on punctuality and accuracy. As a result, I work so late into the night that the trains and buses had stopped operating for the day and had to take a taxi home. We were researching on a strange looking doll that appeared out of nowhere in front of me some months earlier.

One night, when I was in a taxi on the way home, something (which I later found out to be a speeding truck) was sounding the horn at us as it quickly got closer. Then, I heard the sound of a crash and, the interior of the taxi I was in rapidly closing in on me at the same time. It was then I saw a beam of green light shining from the inside of my bag.

The next thing I knew, I had woken up at a hospital of a distant place in the body of a girl, whose father is a university friend of my father, whom I had known since childhood. She had apparently fell into a coma since February. Incidentally that was roughly when the doll appeared.

The way I am now is a huge shock for me as my surroundings are completely different than where I was. Earlier today, a friend who was present when I woke up, helped me to send to the house after being discharged.

For privacy reasons, I shall not reveal who or where I am now or what I will be doing from now on apart from (trying to) living on as my childhood friend that I met via our parents.


I was like "Huh? What?" when I saw that post. A strange looking doll and a beam of green light? Being inside someone who fainted back in February? That all sounds too awfully familiar. Let's see, a person by the name "Kobayashi-san" fainted in February.... 5 days ago, Nagisa visited someone at hospital and the following day she shouted that "Haruna-chan" woke up and people who were in the same class back then were happy, so the person's name is... Haruna Kobayshi? But that Kenneth Tan is now in her body and who knows what he would do with it...

I think the people at work would be interested on my findings on this.

Taelrak said…
Hey, nice blog! I found this site after looking up that poem in ef-a tale of melodies' OP. What is that German poem you have in your title..Der ferne Himmel jenseits des Fensters?
Sunday, October 12, 2008 at 3:34:00 AM GMT+9

The distant sky beyond the window
The unattainable clouds observed
Fly high, high into the sky
Even if you do not have wings
Sunday, October 12, 2008 at 12:54:00 PM GMT+9