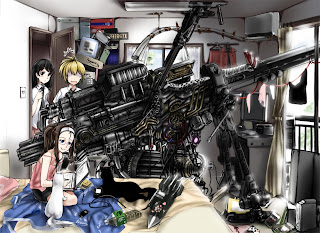 I ordered food and then joined my group of friends shortly to have lunch together. We talked about various stuff, like exploring the various areas of the school like the other day.

The tallest hill in the campus has a nice view of a lake, the entire school, and the greenery around it. We went there and lay down under the tree. Since the tree is large, the area beneath it is large enough for children to run around in the shade. The air there was so nice that my friends had easily fallen asleep the moment they lay down against the tree trunk. As they were sleeping, I took out my notepad out of my skirt pocket and wrote down notes about everything I observed about Haruna until a while ago and put it in back in to show the people at work later on. I wanted to write this earlier, but the cafeteria had too many people and who knows how my friends would react if they saw it. I woke up my friends when lunch was about to end. It seems like they weren't even aware that they had fallen asleep.

The first lesson after lunch was English, so I was kind of looking forward to it with excitement until I saw the teacher walking in with a stack of papers. The teacher had planned a surprise test for today's lesson. Knowing that Haruna (sitting somewhere in front of me) just transferred in earlier today and had been hospitalized for 3 months earlier, he wants to exempt her from the test but Haruna insisted on taking it somehow.

We received the test paper. Even though I can still do this, it is quite a challenge to do so. Let's see, the answer to question 3 is "I went for a holiday in Germany last month. It was great.". Well, I had been taught that ドイツ (Doitsu) is Germany, but when I saw ジャーマニ instead, I didn't recognize it at first. Sheez, this paper is difficult to do. I completed the paper with 5 minutes remaining. Everyone else seem to be struggling to complete, but Haruna looked as though she completed it a long time ago. Did she give up? I can't tell.

Later on, lessons are as usual. Haruna seemed to have completely forgotten everything when the teacher called her out during history lessons as she's usually the best in the school level. How odd. I wonder what happened to her...

School ended later on in the day. I was very curious about the room that looked like the stuff from work I saw the other day somewhere in the school. I'm not sure how all the stuff in this room works or what it's for, but one of them zapped me while I was trying to figure out what it was. I don't know what happened next, but I somehow found myself at the other side of the room at an identical machine with smoke around me and something feels different about my body, like all the aches had disappeared. There now seems to be a girl about my age, and possibly wearing the same uniform, at where I was earlier. I can't really see who it was exactly, as though my eyes had never been used, on top of all that smoke. She seems to be confused at what's going on too. Not wanting her to see me in here, I opened the nearby window and jumped out. The noise I made in the process seems to have alerted her, but I have managed to get away before she found out who I was. That was a close call.

My friends then saw me and offered to tag along to a shopping district in the middle of the city with them as I reached the senior high section of the school campus. Since I still have a lot of time before work starts, I don't see why not. The area between the school building and the main gate is filled with activity with most of the guys involved in various sports clubs like baseball. Speaking of clubs, as the school is quite large (though it doesn't seem to be from the senior high school section and the main gate); there are a lot of clubs spread out throughout the campus. Some clubs have members from primary to college level. Despite all this, only the junior high students are required to join a club. 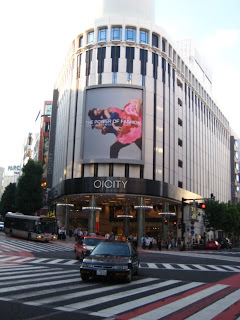 Since we are at the outskirts of the city, and the shopping district is located at the center of it, it took us some time to get there. The place is filled with so many people and skyscrapers, that you can't see the top of the buildings unless you look directly upwards or very far away, which is hard considering that it's in a built up area.

Despite having been here before, shopping experience seems somewhat more fun than before with a different feel to it. Maybe it's because I enjoy shopping as a girl more than when I was a guy. We went through various bookshops, music stores, electronics, gaming and clothing stores. Some of these stores were so large that we spent a lot of time in them. We soon headed to the arcade where there is a "print club” that would produce photo stickers, around the outside of it. We then pose as the timer ticked down. (Some made unexpected movements just before the shot was taken) A friend selected the frame design the rest of us wrote some words. The print came out and we looked kind of silly.

I had so much fun that I realized that I was already late for work. I waved goodbye to my friends that continued on shopping as I rushed to the train station located on the other side of the main road. As I was crossing that road when the walking green man appeared, a van which appeared out of nowhere, overtook the stationary vehicles, and sped up towards me without sounding the horn. I looked towards the source of the commotion and saw familiar faces: the guys that tried to rape me about 2 weeks ago! Next thing I knew was that I was flung high up into the air towards the direction the van was traveling at (Wow, I am really flying and the sky sure is nice) and landed hard on the road like a doll. I saw my uniform stained with some red liquid that appeared out of nowhere and my body is filled with pain all over.

Just as I was thinking about the event that just happened all of a sudden and ended before I knew it, a lot of people were gathering and looking over me with their worried faces. One of them had his arms stretched out and their palms closed together before they...

I tried to jump straight up and shout that out loud to him angrily but, instead, I remained motionless on the road with blood sprouting out from my mouth and could barely hear myself saying anything. Hold on... what is wrong with my body?

I spotted one of my friends, from a while earlier, in the crowd. She had a horrified look on her face and was almost in tears when she saw me. That was when I realized that I am the victim of a possibly intentional hit-and-run incident. My vision soon started to become darker and darker...