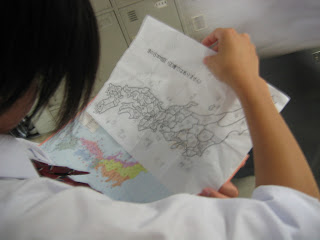 The first lesson after lunch was English, so I was kind of looking forward to it with excitement until I saw the teacher walking in with a stack of papers. The teacher had planned a surprise test for today's lesson. Knowing that Haruna (sitting somewhere in front of me) just transferred in earlier today and had been hospitalized for 3 months earlier, he wants to exempt her from the test but Haruna insisted on taking it somehow.

We received the test paper. Even though I can still do this, it is quite a challenge to do so. Let's see, the answer to question 3 is "I went for a holiday in Germany last month. It was great.". Well, I had been taught that ドイツ (Doitsu) is Germany, but when I saw ジャーマニ instead, I didn't recognize it at first. Sheez, this paper is difficult to do. I completed the paper with 5 minutes remaining. Everyone else seem to be struggling to complete, but Haruna looked as though she completed it a long time ago. Did she give up? I can't tell.

Later on, lessons are as usual. Haruna seemed to have completely forgotten everything when the teacher called her out during history lessons as she's usually the best in the school level. How odd. I wonder what happened to her... 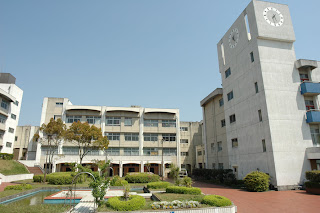 School ended later on in the day. I was very curious about the room that looked like the stuff from work I saw the other day in a building somewhere in the school grounds. I'm not sure how all the stuff in this room works or what it's for, but one of them zapped me while I was trying to figure out what it was. I don't know what happened next, but apart from the feeling that a part of me had went somewhere, nothing seemed to have happened to me. However I noticed smoke coming out of an identical machine on the other side of the room and saw someone that looked awfully familiar coming out of that thing. Oh no, what did I do? Did I cause a fire? I then looked around for a fire extinguisher in a panicked state. As I did so, I heard a window near there being opened, followed by the sound of running fading away. I got closer and that someone have disappeared off to somewhere before I can find out who that was. There was no fire or smell of being burnt, though there was a smell of if I were at a hospital.

I then left the school and headed to work after cleaning up the mess I made. Fortunately, nothing was broken and got the cleaning solutions and equipment in the nearby room that (is also strange and) had mountains of surprisingly useful stuff. Apart from that someone I saw earlier, I didn't see anyone around in the entire building during the time I was there. Later on, I reached work as usual, but I had completely forgotten about the notes about Haruna I had written down earlier that day to the supervisor until I changed back at home. Oh well. 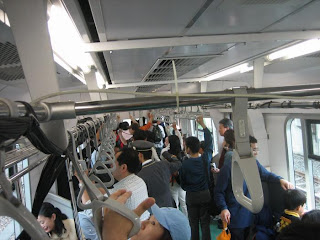 The following day, May 24 (Tuesday) came. People all around me were giving me odd stares and whispers with each other as though I were a ghost. It's kind of creeping me out. The reactions were even larger when I was in school, especially with my classmates. I am so clueless as to what was going on seeing that everyone was behaving normally only yesterday and I hadn't done anything wrong since then. Aiko Hirano (平野愛子), one of my close friends, had the largest shock among everyone. She showed me a notebook that, apart from the blood stains on it, looks awfully familiar. I flipped through it and compared it with mine. Both had the exact same thing written in it! (in my handwriting too!)

I asked where she got it from. She showed me a page of the today's local newspaper, a photo sticker with me and my friends, and on her phone, a picture of me lying motionless on the road, bleeding, as though I had been hit by something. On the newspaper, it said that I, Saeko Hisakawa, was a victim of a high speed hit-and-run incident in front of a train station at a downtown area of the city. The photo sticker of me and my friends was taken at a print club shortly before the incident happened. Aiko then described what happened from the moment we met up at the cafeteria. Yes, we did went to the highest hill of the vast campus, but the part about me going with them after school the whole afternoon is what I don't agree on and said that I was at work when the incident happened. She also swore to me that she and her father (whoever he is) was with me for the entire time since the incident.

At work later that day, the director was waiting with my supervisor. The latter had assured the former that I was present at work yesterday despite the event. The director inspected me closely and inspected the notebook I had written about the Haruna Kobayashi in my class. He says that it's quite strange that there were no bloodstains at all on mine compared to what his daughter (whoever she is) found on me. I don't see what is strange about that.

Wait, his daughter found a blood-stained version on me? Isn't that similar to what my friend showed me earlier? If so, that would make Aiko the daughter of the director! I didn't know that. No wonder they had the same family name and looked somewhat alike!

The director continued on, adding that there is someone, who looks and behaves very much like me, currently in hospital. He would not tell her (the "me" in hospital) or my parents about me being alright until I personally visit her, just to be sure.

Does that mean that the machine I fooled around with in that room yesterday is causing all of this to happen? If I didn't, would that mean that I, instead, would be involved in the incident?

There are so many questions on my mind.