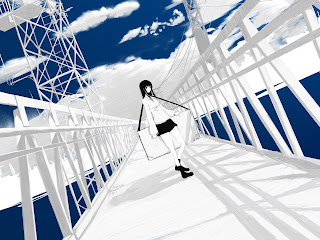 I had in that hospital room for quite some time now. I don't know how long exactly I had been here or what day is today, because each day seems to be the same as the day before, apart from the people who visited me. There don't seem to be any progress with my frozen body since that hit-and-run incident on 23 May. Come to think of it, am I facing the same condition as Haruna back in February? But I don't recall seeing any doll or bright green light.

The television in front of me is turned on to some random channel 24-7. There are times where I don't want to watch it, but I can't do anything about it since I can't switch it off or even close my eyes. All of a sudden, I saw myself on the TV, but this me is in casual wear instead of the hospital clothing and is able move around normally with my own will, like controlling a character in a video game. Previously, it only showed what I'm seeing. I tried to shout "Yay!" with my hands up in the air: well, nothing happened with my body, but the me in the TV screen did what I wanted. I can't believe what I'm seeing.

Later that day, my parents came in my room with tears on their voices. They had been working overseas the whole time and could only find today the time to visit me. This is actually the first time I saw them since I entered this dimension other than the photos at home, though they are the same parents as the dimension I was from. Only difference lies on what I was born as in this dimension and their reaction because of that. They hugged me tightly and crying at the same time as though I had "passed on" and saying stuff that they could have done for me. Well, who wouldn't if they saw a lifeless body of their child. Using the TV in the room, I tried to assure them that I'm still okay, but they think that it is pre-recorded as a farewell message. With a sigh of relief, I showed them a live footage of what I'm seeing on the screen and assure that apart from my own eyes, there are no cameras on me that would be showing the footage from that angle. They then waved one of their hands at me (their hands were too close to my face) and looked at the screen at the same time. There was a sense of disbelief on their faces at first, but they suddenly cried for joy. 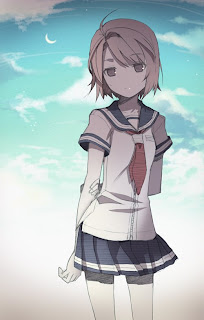 On Tuesday, 7 June, the director came rushing into my ward with excitement on his face. He told me that the plan (back on the night of 23 May) had worked as Haruna had opened the bathroom window while in the bathtub, despite the thunderclouds outside, and is able to strike the "lightning" on her that caused Haruna and *****, her childhood friend who is residing in her body, to have their minds merged. From other people's point of view, this would mean her being back to her old self and suddenly gained knowledge (from *****) that Haruna herself would not know where it came from, but has very little memory on what happened between 13 May and 5 June. According to the director's daughter, a guy in my class named Kyousuke, yesterday, was largely disappointed that Haruna had no memory on what happened on 4 June, where he dated her around Tokyo somewhere and then proposed to her in a fast food restaurant there with the people there cheering them on. Because of that, the director wasn't sure if he had done the right thing. He also added that the two guys who had attacked me earlier had given up, looking at my current state, and the fact that they were arrested when they tried leaving the hospital. (that explained the police siren I heard some time ago)

The thing that puzzles him the most is that his daughter told him that I was present in class since after the day of incident that caused my current condition as though I had already recovered or the whole incident had never happened with my teachers and schoolmates as witness. Huh? Me? Present over there right now? How can that be?

At that moment, the Haruna Kobayashi I had been observing, had entered my room with the voice of uncertainty when talking to someone with her. The girl next to her looked very much like the normal me (in this dimension). Both of them had a shocked look on their faces when they saw me.