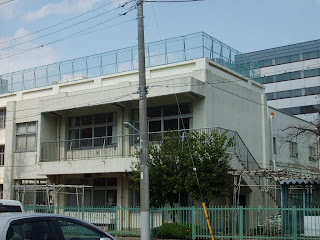 As summer approaches around the beginning of June, the weather has become so unpredictable that I brought my umbrella whenever I go.

I have not forgotten what Haruna told me a few weeks ago. After what happened last month, I have somewhat gotten used to this routine that was originally hers. There are sill things that I'm not familiar with though.

After school ended on a Saturday, Kyousuke approached me. He looked somewhat nervous.

Kyousuke: "Um, Haruna. Would you like to join me to go to Harajuku and Shibuya? I'm looking for something to buy there. Just the two of us."

Well, I don't see anything wrong with going out with him like we are buddies, but then I remembered that I am now in a girl's body. Haruna (the original owner of the body i'm in now) had earlier told me that either Minoru or Kyousuke has liking for her. What should I do? I started to think a lot of things. Haruna seems to be thinking about the exact same thing.

Kyousuke: "Are you alright? It's okay if you don't want to."

It seems that he wanted to say more than what he just said, but he didn't.

Hauna: "I'm okay. It's just that nobody has asked me out before other than in a group."

Those words automatically came out of my mouth. I have noticed recently that I have the exact same thoughts and feelings as Haruna and that she is able to control this body more frequently and I still have control over it when it happens. Is it a sign that our minds are in the process of being merged? Will I start to think and behave as though I really am Haruna? 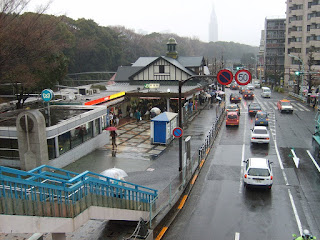 We took the train to a place called 原宿 on a line called 山手線. It took quite some time to get there as we had transfer between many line from where we were. It was raining heavily when we reached the exit of the station.

Kyousuke: "Ah, it seems to be raining. Shall we share my umbrella?" (starts to bring it out)

I wanted to say that I had brought my own umbrella, but then again...

We walked around happily holding the umbrella together towards a shopping district around there and latter on to a place called 渋谷. I don't know why I'm starting to feel happy when I'm with him.

As we walked around through the crowd, Kyousuke offered that he would pay for anything I would want there. I don't know what I want there, but Haruna seems to do the selecting herself and said that she would pay the expensive items herself. (with money that was under the parent's bed I saw on the first day back from the hospital) 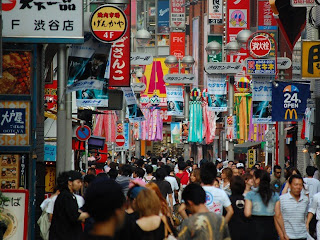 It seems that, except for the stores I buy things at (which are mostly clothing, books and some electronic devices), whatever Kyousuke bought for himself is wrapped in such a way that I can't tell what's inside.

It seems that there some companies that I am familiar with there like the convenience store with green, white, orange and red colour schemes and a fast food restaurant that has the famous golden arch. The latter of which we took a break from shopping and have a meal.

As we entered, I saw the familiar typical layout of the branches of that restaurant. Apart from the language and some additions, the menu and the price are relatively the same. Finally, something that I'm familiar with in a world surrounded with things that I'm not. I bought food with Kyousuke and sat down at one of the tables there.