A lot of things 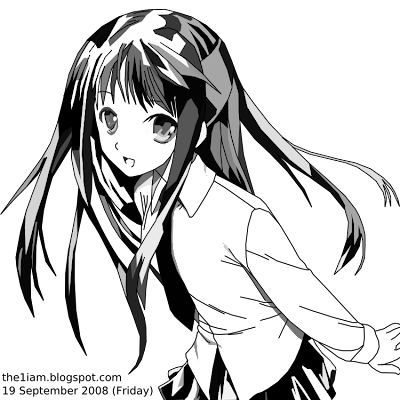 Note: It's not complete.

As you can see on this blog, there are a lot of things. There is a long list of links to my friends' blogs, and it's in a table format using HTML. In fact, there are a lot of things here that uses complicated/advanced HTML codes, including the HTML (classic & XML) layouts of all my Blogger blogs, which stands out from the average blogs. Some of them even look as though it's hosted elsewhere as I leave their images and links intact and hide the Blogger navigation bar. On top of that, if you are using recent versions of internet browsers, you might also notice an icon next to the URL and/or the title of this blog at the tabs that replaces the default blogger icon.
Other than editing HTML, I might be writing stories, drawing/vectoring, hunting for images all over, re-editing stuff I have already done, go out to somewhere, and whatnot. Speaking of "hunting for images", the ones you had seen me using so far are only a small percentage of the total I have. These things have kept me occupied so much that time seems to fly by quickly. It's like my birthday was yesterday, when in fact, that was slightly more than a month ago! There are a total of 456 posts across all my blogs made since 2006. 252 of it is from this blog and the average post are quite long with little images and small/normal sized typeface.

When sleeping, I try to sleep lying down flat on my back, but when I wake up, I find myself lying sideways with one of my other pillows covering my ear. Come to think of it, I don't ever recall rolling off the bed when sleeping, though I have dreams that seem realistic. Sometimes, they are indirectly telling what my body wants to do, like me drowning in a river would mean that I would need to use the toilet urgently. For some reason, at bedtime, I don't want to sleep, but I end up doing so because my body force me to by making me drowsy and not able to think properly, but the opposite happens when waking up: I want to go back to sleep despite not being sleepy or the time being close to noon.

Vectoring low-resolution, TV screenshots, or black & white images is a nightmare. The lines are not very visible and colours might have been mixed with nearby areas. Even though this one (Clannad: ep 2-4) and this one (Clannad: Tomoyo Chapter) turns out alright, this one (To Love-Ru: ep 20) and this one (Zegapain) didn't turn out the way I wanted it to. The new main character of Jigoku Shōjo Mitsuganae (地獄少女 三鼎) I saw in the trailer (go to 2:34 of the linked video) looks nice to vector. The one at the top of this post was originally in black & white (not monochrome), like the style use in comic books. The problem was that there were a lot more hair strands that were small and detailed and I can't see clearly where the vector lines I have done so far without looking through the sea of black pixles or hide the source image. It got easier to see when I vectored the shades based on the shape and tones, even though it's in monochrome.

One of the best vectors done so far:

The hair was originally green, like Shion Sonozaki of Higurashi no Naku Koroni, but I didn't like it.