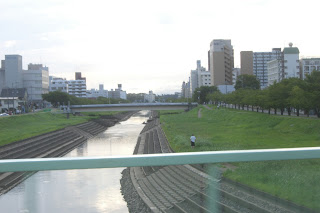 After using the vector program for quite some time, I have only found out yesterday on how to form the curve. This is quite useful as not many nodes (points) of the line is needed to form a curved section, or making sure that a circle is really a circle and not multiple amounts of straight lines so that it looks nicer. Earlier on, I have also found out on how to have a colour gradually becomming another colour (or transparent), as you might have noticed for the ones from August 8 this year. I have been editing all the vector that I had done from 20 July this year to improve on it. The whereabouts of the original files of vectors that had been done earlier (like this one done 2 years ago) are unknown as they are either not saved after exporting as png, sotred on a disc somewhere, or is on a PC that I hardly use now.

Anyways, here a vector of the same thing. One is the version immediately after completing it, and another is after what was mentioned earlier. Try to spot the difference: (click to enlarge) 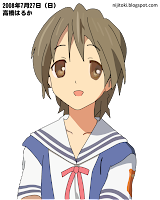 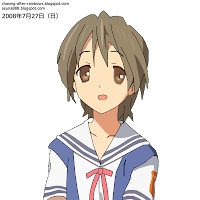 Can't tell? Here's the difference:
When I'm done with this, it should appear in "My Drawings" or "自作絵" sections of my blogs, though the only difference you can see in the thumbnails is the blog URL: the smoother lines are not visible. Pencil drawings are left unchanged.

PS. If you had watched the Tomoya and Tomoyo special of Clannad, you might have seen this character, but only for a short while.

(I have managed to solved the problem mentioned here, but it still doesn't look right.)