Customized Blog Layouts by me 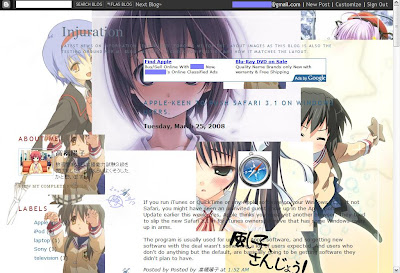 The best blog layout I have ever made! XD

If you had been browsing through my blogs (especially this post), you would notice that, despite having a lot of them, each one of them would have a different layout. Unlike most of my friends I know, I would pick a XML layout (difficult for beginners) and heavily modify it to the point that if you were to check where I got it from, it would look completely different.

For example, the above screenshot is one of my first few attempts back in March/April this year to edit one of the default blogger XML layout of what you see on the left: Harbor. What I did then was to replace the image URL to figure out what each image is for and where and how it would appear.

There are several reasons why I change. Some was because of the things that I had added/modified (espically the navigation menu), others are by the seasons, while the rest was because the previous was just a test, looked awful, or one of the default layouts. I have made changes to so many of my blog layouts (including minor ones) so many times that I lost track of it.

Speaking of blog layouts, did I mention that I made changes to this blog a while ago? The last change was about the same time 3 months ago.