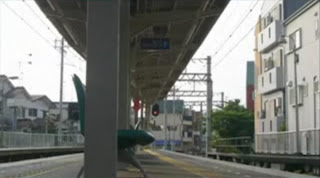 After a walk down the hill and through the streets, I arrived at the train station and waited patiently for the train to arrive. The platform appears to be as crowded as usual. The people I always see at their usual time and place, but don't really know them, are still there but did not notice the obvious change to me. Did they think that I'm someone else, or always see as what I am now?

On board the train, I try to avoid potential gropers and men holding their cameras or mobile phones suspiciously. Why must I do this extra step now? At least I know what men could do on board trains as I have seen photos they had uploaded online.

Unlike mornings, the train isn't filled with working adults, but is still filled with some students from other schools that are not having club activities today. I sat at what appears to be a safe safe spot to sit at and started to think what would happen at work now that I'm like this. I took out the work pass that I found this morning: it still has the old picture of me along with my old name. I found that strange considering that everything else that has to do with me has changed. Why is this the only thing relating to my old self left unchanged?

Upon reaching the workplace, a colleague that I seldom talk to was seen standing outside. He appeared to be waiting for someone to tell something important to, like it's a matter of life and death. Could it be for me? I approached him cautiously and asked politely. (I'm still not used to having a sweet female voice coming out of my mouth.)

Me: "Pardon me for asking, mister, but why are you standing here looking all worried?"

I just wanted to be cautious in case he does not know me. Was not expecting him to reply immediately though.

Colleague: "My supervisor had told me that something had happened to a particular someone at work by unknown forces last night. We wanted to contact or even visit him, but he appears to be using a different number now and is living somewhere else in this dimension. I hope he would come forward to here as I was told to bring him to the supervisor's office if he did come. Wait, who am I talking to?"

Upon realizing that he was talking to me, who could be a random person on the street, he jumped back in shock.

Colleague: "Oh no! I was talking to this schoolgirl without realizing it! Good thing I did not talk about critical stuff I could get fired for! You don't seem the kind of girl who would... huh?"

He looked at me carefully from top to bottom as though he found me familiar. He also noticed the pass hung around my neck and the device I was working on last night on my wrist (I completely forgot about it).

Colleague: "Could you be...? Can't believe how cute you had become now!"

Me: "Hey! Where are you bringing me to?"

He suddenly dragged me into the building. Even though I knew I was being brought to the supervisor's office, me asking that question was my natural reaction to what he did to me. 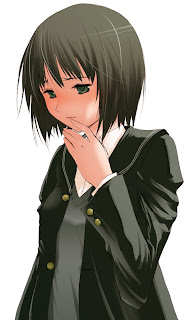 Inside the office, the supervisor looked at me in disbelief: instead of a boy, he saw a girl that had the work pass of the boy he was expecting. Even though my face now looks completely different from my old self, I still resemble both of my parents. I'm sorry that this dramatic change to myself happened beyond my control and caused confusion to everyone.

He hesitated for a while, but greeted me with wide open arms, as though wanting to hug me for some reason. He also appears to be blushing and staring at the upper part of my body from the moment I entered the room. What is wrong with the guys in this world? Is it because I'm a girl now, or are they just like that? Even my natural reaction to this is different from what I was used to.

Supervisor: "Okay young lady, I don't know if that man who dragged you here is who he thinks it is, but may I know your current name and the one before that, what schools you are attending currently and also how did you get that pass? Because you don’t look like who I think you are."

I'm not used to be addressed as a girl, so I thought he was talking to someone else, but there no other females in the office.

Me: "I'm Saeko Hisakawa of the High School on top of the tallest hill, but I was known as Itsuki Hisakawa of the High School at the foot of the same hill before today from my point of view. The pass here has been with me since I started working from a recommendation of someone from headquarters after seeing me at a programming competition and I came out at the top. The pass was on me shortly prior to the incident when I was working on this thing last night at home. I myself am shocked over this incident."

I showed him the device on my wrist. He appeared to be more serious when I mentioned my former name.

Supervisor: "Oh, so you were that Itsuki-kun. *cough* Sorry for my rude behaviour earlier, didn’t realized that it was you. It seems to me that you were born as a girl in this dimension which results in your parents being very happy, work better, and earn enough to live at your current house. Since they were happy, you were also happy and did well in your studies to get into your current school. I also hear that you are also one of the top students there but average grades at the previous school. I hope you would prefer this life more over the previous one since it could be one of your greatest desires."

I stopped listening from when he said about my parents being happy. Maybe that explains why stuff that I wasn't familiar with in this dimension seemed second nature to me.

Me: "So does that mean that I can still work here?"

Supervisor: "Well, why not? We employed you because of your skills, but I think you had enough shock for today, so I'm giving you the month off to adjust to your new life, though you can come back if you like during that time if you would like to. You can still use the old pass until the new one is ready, which should be in a week or so. By the way, how do you like this new body of yours?"

He looked at me with those perverted eyes of his. He didn't even stare at me like that when I was still a guy. Now I know what staring at girls from their point of view is like.

Me: "Err, yeah. It's what as you said earlier, I had always wanted to be like this for a long time now. But I did not expect it to actually happen this way."

I thank the supervisor as I left the building. I wanted to meet Nagisa at the hospital, but looking at the current time, visiting hours might probably be over by the time I reach there. On top of that, I also need to find out whom she's visiting there. In the end, I decided to head home instead. I still have things about this dimension that I don't know about, since everything around me, except myself and the school I go to, seem to remain the same as before.