walking home at night; About the "Alternate Dimension" story 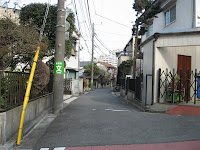 Even though my country has one of the lowest crime rates in the world, I still feel uncomfortable when walking home from the bus stop or the train station.

Sure, it's not that far and the area in-between is well lighted with mostly houses along the streets, but the dark skies, the eerie silence, the uncertainty and sometimes dogs barking at me loudly when walking past a house, are enough to make me feel scared.

Well, I know that this is kind of late to post this, but I have created a new story as you can see from my recent posts.

Apart from what was already mentioned at the bottom of this post, you might have noticed some similarities on the setting and timeline of the earlier story. It wasn't really intentional.

As mentioned, this story is loosely based on the Suzumiya Haruhi light novel series by Nagaru Tanigawa (谷川流) or more specifically, the book called "The Disappearence of Haruhi Suzumiya" (涼宮ハルヒの消失) which is the 4th volume in the series. Well, people who have read that book would know how different it is from mine.

This story follows a girl by the name 久川沙江子 (Saeko Hisakawa). The timeline starts the day before, Friday May 13, when a device the main character brought home from work changes the character from the house, the school, and the character's body. What I did not say was that these are the things that the main charater had been wanting based on a "what if" belief. What Saeko's given name and gender was before the change is up to you to decide, but when I mention it, it would appear as *****.

Speaking of *'s, I did not give a name for the main character for the previous story. As it was told from his point of view and is residing in his childhood friend's body, there isn't a need to mention it and the people calling are usually ment for her (Haruna). Have you ever seen Kyon from the anime adoptaion of novel mentioned earlier have his given or family name mentioned despite being the main character? No, only by nickname or in such a way we don't even hear it. For my latest story however, I would use ***** ***** instead. I have switched from speech to narrative as I can come up with things better if written in the latter format.

This story is mostly a type-as-I-think type of story, so even me right now would not know what would appear in the next part. Some of the earlier parts may be edited without notice.


Colours of the layout of this blog may change for Halloween (end-October) and Winter (December). The layout of Japanese version of this blog is (mostly) unchanged since I created for both. Previous changes since then were for Summer and Autumn seasons.