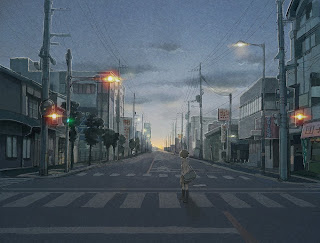 Sure enough, mother wasn't around when we reached home.

Itsuki: "I would like to show you me transforming back, but it wouldn't work if you were to even wait for me outside our room or have active cameras pointing at me. Why don't you cook dinner or watch TV while waiting.

Since I was distracted, I wasn't paying attention to how much time has passed. Then, I could tell that Itsuki calling me and what he's saying to me, but I couldn't hear him. I could see Itsuki in this form better than earlier, but something is odd about how my mind is registering what I'm seeing.

Not wanting to wanting to wait for mother to come back, along with the work that I have to do, I headed back home.. I thought I heard Itsuki wanting to give me a "force to stare at myself" sometime in the future, but didn't think about it.


Fast forward to the beginning of my third year there. As a rough gauge of what time I'm in, the topics that anime fans are talking about this time range from a light music club that doesn't represent well the light clubs I know, an after-death world with pointless fighting, some strange events that cause gangs to fight each other in Ikebukuro in a misunderstanding, a daily life of a restaurant in Hokkaido, it's mostly focused on high school students basically.

More importantly, among the new first years that just came in, a girl that strangely resembles Kotomi's siblings, started to come into the club and seemed to know one of the members there, Takuya, quite well, but has no interest to join the computer club at all.

Being the seniors here means that college preparation tests would be taken more seriously, usually starting even before the summer vacations. There are a noticeable number of students here who do not plan to go to college, with reasons ranging from taking over the family business, to them having enough of education. Because of this, the timings of things like field trips has to be pushed back.

With my popularity in school being so great (I didn't ask for it), it wasn't long before someone asks me where I would be headed to next. The thing is that it's already been arranged that I would be headed to Mizuho after Kamisugi, and I dread going through the same things over and over again like in a time looping world where you are sent back to the beginning just as I though I am about to reach the finishing line of entering college. I'm having trouble answering this kind of questions due to the many possibilities that could happen on what and how I say it.

With my curiosity about that girl's faint resemblance to Kotomi's family, I decided to ask Takuya about her. I don't know if he really knows her as he has this annoyed look each time Nanami goes up to him.

Me: "Hey, Ishida-kun. About that girl that keeps dropping by to see you, do you know her?"

Takuya: "That girl? Her name is Fujibayashi Nanami (藤林菜々実). I had known her since primary school. At first, she seemed like one of the many faces I see regularly, but not really know her much. It wasn't until I was walking past the playground and noticed her being bullied about her appearance being like that of a foreigner and "head back there". I went in and stop the bullying, but they started to attack me. Nanami was crying and begging to stop, but they didn't listen. The bullies didn't stop until Nanami's older brother came and heard her sister screaming."

Takuya: "Well, she is two years younger than me. Then they invited me to their house, which is just a short distance away from the playground, from time to time since then as, according to her brother, doesn't have anyone close to her besides her immediate family and grandmother. All her other relatives are relatively unknown and live in other prefectures."

Wait... Takuya is Two years younger than Nanami? If Nanami is in the first year now, that would mean... HE'S IN THE SAME ACADEMIC YEAR AS ME?! I was thinking he's a second year and plan to have him to take over me as the president, but I don't think so. I have another candidate that is liked by most members and with the ability to lead the club, but his behavior annoys me.

Takuya: "Nanami's brother is now in university and works part-time to buy and maintain his motorcycle. According to her mother, she, her siblings, and her children inherited the foreign appearance from her late father, Nanami's grandfather obviously. I heard he suffered and escaped from the Soviet Union before marrying Nanami's grandmother and adopted the wife's family name. I think the family name was Miyazawa."

This sounds awfully familiar to me: Kotomi did tell me that her great-grandfather was a Russian, her family name is Miyazawa too, both does have some resemblance. However, if I were to draw the family tree, it would seem that Nanami is Kotomi's aunt, but, adding to the confusion, Kotomi is older than Nanami.

Me: "I feel sad for her for being criticized of something she was born with or wondered why she looked different from her peers. So, is she in any other club? I've seen here so often, but wondered why she's didn't join our club. She seem to be more interested to seeing you instead. Nanami would just enter when there are no meetings without knocking and even went past me without a second look. The members might not know each other well, but I know who my members are, including the newcomers."

Takuya: "You did seem to blend in like the other members and not realize that you were the club president. I warned her about you, but she doesn't listen. Anyways, she in the swimming club and likes to swim a lot, but can't either handle the pressure of competitions well, or is afraid of the large crowd full of unknown people. I was there during her practice, and she seem to do worse at the actual competition than during the practice. As to why she come to me like a magnet, she still sees me as her savior of the bullying incident we talked about earlier."

Takuya's face tells me that he's annoyed about it. Friendships made with the opposite gender before the age of puberty see each other differently as to those after or during puberty, so he does not see her as a girlfriend. Nanami has probably reached puberty earlier than Takuaya, which might explain the one-sided affection between the two. I heard that even siblings of different genders can be attracted to each other if they were separated at birth and the fact that they were siblings was not revealed until after they met each other. Oddly enough, Takuya did not ask about my sudden interest in Nanami.

As Nanami has seen my face before, and with the strong feeling of the chances of her meeting Kotomi with me around is quite high, I should be careful about what and when to say things. If Kotomi were to say out things about me that is completely different from what she knows... well, I don't know how she would react if she were to say that I am the clone of her husband-to-be of the same age from her high school and me wearing the Mizuho uniform (as I probably can't remove it during my time there), is the same person as her senior of her high school. It could get messy, but Kotomi might help me out there. Sadly, Kotomi still doesn't know about my return from the other dimension as I've narrowly missed her by a few days before she heads to America for her overseas university education for about 3-4 years. The academic year there starts in September instead of April, but she headed there early for preparations. Itsuki seems to be refusing to let her know about my existance despite keeping contact with her on an almost daily basis, as though they can't bare not seeing each other's faces for long.