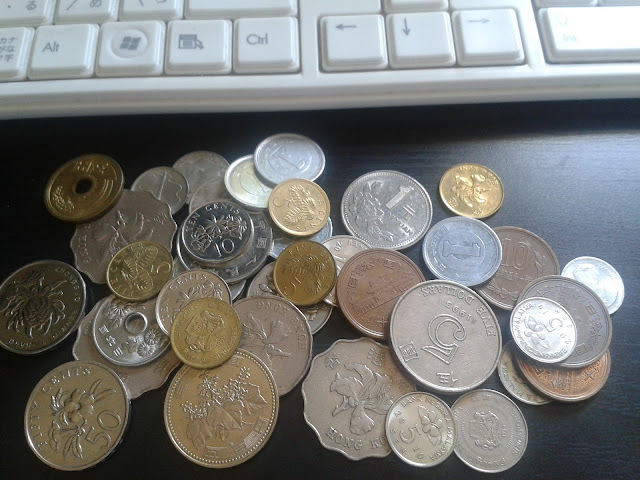 Having been to many different countries, I have accumulated quite a number of coins. As you probably know, the money changer do not carry coins besides that of the local currency. Sure I could create a collection out of these, but there are extras left over for it. How to deal with these?

I don't know what is the smallest denomination the money changer would accept, but it's certainly banknotes instead of coins. I have received RM1 notes, which are worth only US$0.31, and sometimes, the highest denominated notes of that currency aren't worth much, so exchanging a few pieces, and getting the equivalent in foreign currency back as thick stacks of notes.

Well, if going to the country again, make sure to bring those coins along, and try to use as much of the smallest denomination as possible, or pay in a way that you don't get small denominations. Example: Paying the exact change (or as close as possible) with as many of the low-denominated coins as possible instead of being lazy and use a denomination that is higher than what you are expected to pay. Would you rather have a note that could be changed back to your local currency, or have the same amount in coins that you can't change?

Sometimes, that could be hard to avoid during the last day. One thing for sure is that I didn't have those coins before I went there for the first time.
journal random

Haruka Takahashi said…
Not really. Traveling abroad is not that hard once you make the time. Cost can be cut if you plan it yourself instead of through a travel agent.
Thursday, July 5, 2012 at 6:26:00 PM GMT+9