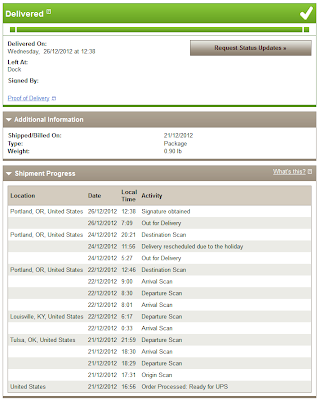 The Kindle I mentioned earlier has been delivered to forwarding service with US address at 5am on the 27th of December 2012 (JST).

In between these two events, it is held at their warehouse for up to 30 days (for free) so that I could wait for other shipments to arrive and ship everything from the US address together, which I didn't have any. The state it is located in, Oregon, has a 0% state tax at the moment.

Unless the shipment comes with information regarding its value, you would have to declare its value (in USD) before you are allowed to ship it out. Then they charge US$11 (international shipping) + cost of fuel (based on actual weight or volumetric weight, whichever is higher) + "mandatory" insurance (based on some percentage of the total declared value of items you selected for shipping) - discounts. New users would receive a US$10 discount (which expires by the end of the month and redeemed manually) and, depending on the payment or the bank that issues your debit/credit card, you might have an additional discount that is applied automatically.

What is the problem I faced since the last post? I still have yet to receive it, and it's still in Portland! Further delays is the weekend and New Year in between. Apparently, those days are not counted as "business days" I mentioned earlier! Adding to the confusion is that the US is in a timezone that is more than half a day behind mine. I finally see real progress when it's finally being shipped via DHL now, though still in Portland at the moment. Scheduled date of arrival is 7 January 2013. 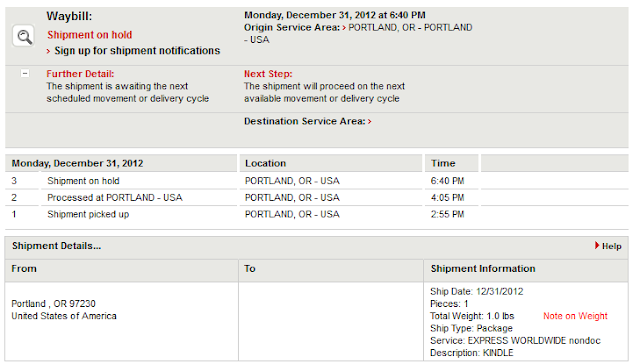 Will I use this forwarding service again? Maybe: for things not found at where I live where they don't ship out of the US for some odd reason, but not illegal to import/export it. Otherwise, try to have it to ship directly whenever possible. Avoid using at the time where it's known to have a lot of people using it, and with so many non-working days.

PS: Another separate order I ordered the day before I ordered the Kindle to be delivered via SAL has yet to arrive. It would be funny if I receive this before the Kindle as courier mail is supposed to be faster than normal mail.

(I didn't count the numbering of this post wrongly: previous post is actually the 636th.)
random updates