January 10, 2013
Back in 21 December 2012, I ordered an Amazon Kindle from the US store, along with other problems that followed involving the delay of delivery due the holidays. 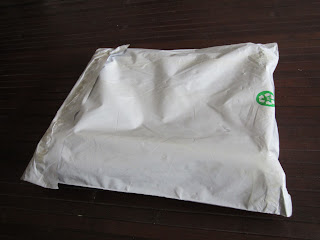 Anyway, it arrived at the delivery center closest to my home on Friday, 4 January 2013. I knew Saturday deliveries are only by appointment. The day it was delivered (6 January 2013) being a Sunday, I wasn't sure if I should be expecting it to arrive since it's the weekend until I saw on the courier's tracking page earlier that day that I saw it being delivered. It was a good thing that I wasn't planning to head out that day, though I did on Saturday. 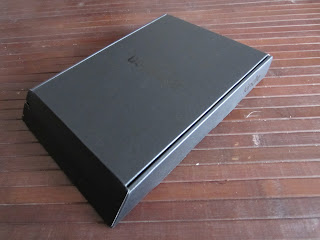 The Kindle is packaged in a "fustration-free" packaging that uses minimal resources. The only things inside was the kindle itself, a microUSB (or was it mini?), and a card containing some basic information. (Why include a very long printed legal information anyway?) 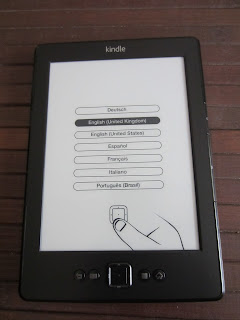 I opened it up and was presented with several languages to choose from. (Japanese was not included, and is not sold at Amazon Japan either.)

Since the day I ordered, I have been preparing the things to load onto the kindle, like ebooks and such. Even before ordering, I had already accumulated quite a number of PDF files. I tried reading those, but reading it in an uncomfortable position or a display that hurts my eyes or on a tiny display (iPod Touch) isn't an ideal way to read these things. I could print, of course, but onto a sheet of paper that I would look at only once isn't exactly pratical or saving money.

This Kindle is the first device I own that uses the Eletronic Ink (e-ink) technology, though not the first to not have any built-in light. E-ink displays consumes energy only to change what is being displayed and, unlike other display technologies, not requireing energy to maintain what is being displayed. The slow refresh rate makes it impratical for use for displaying rapidly-changing images, and colour versions are still in the development stage, which is why its applications of use are limited to reading text or still images.

Reading on the Kindle is as sharp and crisp. Despite no backlight, it is still readable as long as there is light at where you are reading. I read this thing while on the train during the day, and it didn't bother me when the train entered or leaves a tunnel while reading. This is usually a problem when I use other devices where I found myself having to adjust the screen brightness that is a hassle to get to since the controls aren't hardware-based.

So how big is this thing? I could give you all the specific measurements, but even I found myself wondering how big the measurements provided is in actual terms. You would understand it better as "the size of a CD player"; larger than an iPhone, smaller than an iPad. The size of the screen is 6 inches. 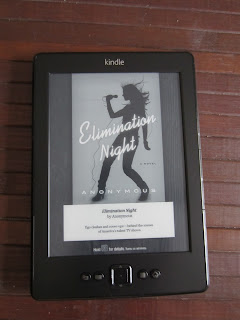 I had considered getting an iPad just to read PDF files, but as I was searching about, I discovered eBooks, eBook reader, and the eInk display. Might have heard of those before, but never really thought much about it; partly because I don't see these things in the eletronic store. What further prompted me to buy it is that the cost was at US$99, and the add-supported version added a US$20 discount. Then as I ordered, I noticed that I was looking at prices for the 2011 edition: the 2012 edition was US$10 cheaper. This meant that the final price was US$69 (not including tax and shipping). A few dolars cheaper does make a difference when the amount is converted to a different currency, with some of the amount going to the banks and MasterCard/Visa as fees. The lower the cost, the less I pay to them.

Reading the information of other ebook readers by other brands, they do not support displaying Japanese characters as text, despite saying that they have "support for multiple languages". (It was hard finding out what those specific languages were.) Also, I know that the ad-supported version is targeted for the US market only, but since I already heard that the ads are non-intrusive, and the screensaver of the ad-free version is always the same and can't be changed, I thought: "why not?"

Since I received this Kindle, I find myself reading more often than with actual physical books.
kindle random updates