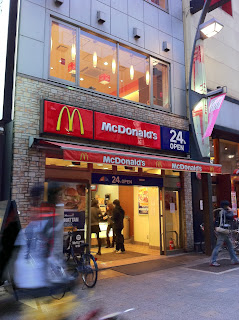 On March 6, I was discussing with other Twitter users about how I've been to McD.

I've said this before: I lived and grew up overseas until recent years. If you were to convert the prices of the same meal to a common currency, I would say that the country neighboring where I grew up in is a lot cheaper than ones in my homeland.

Oh, and what is this "country I grew up in" and "home country" I kept mentioning, but didn't give details about? I'm not telling, but I've dropped hints around. (Hint: Photo on the right is of an outlet of a place called Ameyoko)

Somethings wrong about how I grew up: My foreign language skills are a lot more fluent than the native language of my family. I'm even writing in that said foreign language right now that even I'm scared of how good I am in it. I know enough that I'm now surrounded with bad English (though I've seen worse). I could have grown up in my homeland, with a completely different language that I'm fluent in, get more used to lower humidity and temperature, if it weren't for them. (I'm the odd one out in my family, but it's not my fault.) My parents somehow decided that I, among the siblings I have, grow up in an English-speaking environment overseas so that I "could be relied upon" since, except for dad (who was the one that raised me up and lived with while growing up), they don't even know any English at all. Take my younger sister for example: she doesn't know any English.

I didn't know about my parent's "experiment" with me until I had to move back to my homeland that I'm not familiar with for legal reasons relating to my age where I become an adult (20 for my homeland, 18 or 21 for where I grew up in; can't keep nationality of both countries when I reach that age) but it's also where my relatives and the rest of my family are. A conflict of what I grew up with, and my family roots.

I wouldn't feel comfortable if someone I had known for a while (including relatives) were to suddenly speak to me in a language different from what they normally talk to me in, no matter how skillful I am in it.

Also, it's been 7 months since the last post, but I've written a post about the Tohoku Earthquake on the Japanese version of this blog. I was also translating "Alternate Dimension (Part 3)" (written on October 2008 in case you noticed that the most recent part in English is numbered as 66) when some editing mistake caused the whole post to be blanked. I was already 3/4 done when it happened. I'm so devastated to even want to start over again.
myself