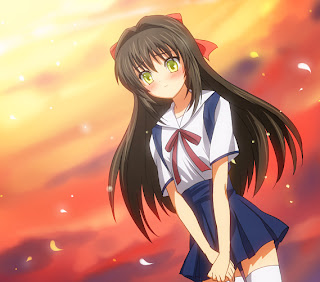 Almost two weeks has passed since then. Kyousuke, one of my classmates, entered the class with a big smile on his face. He seems to be talking about something happy with his friends. When Haruna entered the the class, however, his happiness turned into depression when she said that she doesn't remember what happened two days earlier. She also seem to be unfamiliar with most of the classmates.

When she saw me, she suddenly had a smile on the face and sat at an empty seat nearest to me (which is actually hers, but she thinks it's someone else's) and talked to me. What does she want? She normally doesn't even talk to me since she was released from hospital.

Haruna talked to me about how she was in February 4 and now it's suddenly June 6. She also added that she had also seem to have suddenly gain knowledge that only her overseas childhood friend would know. I don't know if I should tell her the truth, but there things about myself in this dimension that I myself don't know. I ended up referring her to Nagisa (another close friend of hers) instead.

The next day, Aiko wanted us to visit "me" in hospital as a request from her father (director of the company I'm working for). She would like to tag along with us, but she has club activities to attend to and would turn up later on. Visiting myself? Sounds odd.

We took the bus to the hospital. I don't know what to expect when we arrive though. The room is located at one of the upper floors of the hospital, so we had to take a long ride up the elevator. Hospital staff were staring at us in disbelief, especially me when Haruna asked the reception where the "me" involved in the accident is. (I wanted to do the asking, but that would be like asking where I am.)

I reached the door that has my name (久川沙江子) on it as the patient of the room. I kind of feel uncomfortable about this. Hey, Aiko, are we at the right room? We fidgeted about entering the room until Haruna made the first move by opening the room door.

The first person I saw was the director at the bedside, who was shocked when he saw me. On the bed in front of him was a girl who looked very much like me in a frozen state. Is she dead? She isn't moving, and her face has a frozen expression of being hurt. Come to think of it, why does she look very much like me and even has the same name? Both of us (me and Haruna) were shocked as we stepped in.