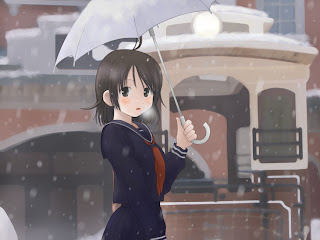 Since 2006, I have started watching mainstream anime that airs late at night. Not because of Suzumiya Haruhi (though I did watch it), but as a departure from the ones that were mostly targeted at children and/or don't seem end after hundreds of episodes like Pokemon and Naruto.

I did, however, watch ones from before that year later on like Serial Experiments Lain, Dual! Parallel Trouble Adventure (did watch this a long time ago, but was too young to know what was going on), Midori no Hibi, Negima (1st season), etc.

Apart from the aspect ratio being 4:3 (letterbox) instead of 16:9 (widescreen), there are noticeable differences. Comparing the Winter 2002 and Autumn 2006 versions of Kanon, I would say that the newer version has improved quite a lot.

There are however, recent anime that are based on something that has been around for quite awhile (Clannad), while there others that are of original content and are quite good (Code Geass, True Tears)

Why am I posting this? Well, it's has been quite a while I had typed something somewhat personal here. Besides, my recent posts has been mostly been about a story (3 related stories related actually) that has mostly lengthy text.

Speaking of "having a new twist", here is a video I found of Toradora first opening in Kinetic Typography. I have replaced the IMEEM video of my lyrics post of this song with this video.

Edit: Huh? Yukari has recently posted about the exact same thing as me? (O_O)