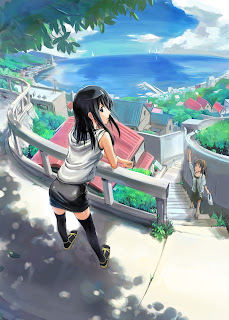 Well, the old title of my stories has been bothering me for a while. At the time of creating them, I don't really know how to name them. I spend too much of my time thinking of titles that I just put whatever was on my mind in there or was originally planning to write at first from scratch. However, it's these titles that don't seem to match much as the story progresses. Add that to the fact that most of the titles I could think of are used or are not good.

Naming characters is not as hard as the title. I never gave the exact name or location of places or the unique features because I don't have a clear idea of what the place looks like except the area where the main character frequents at.

1st story: You know the protagonist was never given a name, right? Well that was because he is already in Haruna Kobayashi's body, his childhood friend, after he had (supposed to have) died. I see no point giving him any as people are going to call him by the body he is in anyway. As I already mentioned that he was from a faraway country, what do I name him? Henry Lim? Also, Haruna's school was supposed to be a normal school, but due to mentions in the 2nd story as being a classmate, it became a large school academy. The size of the school was not mentioned in the first story, but was revealed that the average school is already considered large with better facilities compared to where the protagonist came from.

2nd story: I was originally not going to name the protagonist except Hisakawa as the family name as I just want readers to wonder what the gender is and know that it had changed later on. However, I found out that I had trouble describing things, so I decided that the main character turned into a female with Saeko as the name. After writing for quite a while, I found that I am writing "Hisakawa *****" quite frequently to refer to the former male self and could easily mix up with "***** ******" used for the main charcter of the first story. I end up giving "Itsuki" as the name and went back to modify. (I think I mixed up "Izumi Miyazawa" with "Kousei Miyazawa" on part 25.) Around the time shortly after the main character got clonned and got involved as a hit-and-run victim, the people that found her (the protagonist) became too important to not give a name. I gave the director "Kenji Hirano" and the daughter "Aiko Hirano".

3rd story: The main character was originally named Kotomi Honda (本田ことみ), but people seem to mix the family name with that car manufacturing company. Now changed to Miyazawa (宮沢; 宮澤 for her great-grandmother). Might give kanji for the name, but I'm not sure. I had also decided to make the main character be the girlfriend of the main character of the 2nd story and have it start more than a year before where the 2nd story started. That was when you suddenly made a character that appeared mid-way as a major character in the 2nd story. Because of her smartness, it was obvious to make the "Aiko Hirano" already mentioned as her cousin.

4th story: Haven't really decided yet, except that she's a distant relative of the main character of the 3rd story and takes place 4-6 years after the starting point of all the earlier stories. I want this to go through a faster pace through high school (and maybe mention little of it) and jump forward to college, then to work, and having a family. Since my mind is a blank as to how to write this, I'm going to concentrate on other stories for now.

The first story is named "An Original story by me" as I originally wasn't planning to write another or have it last for so long.
For the second story, the name "Alternate Dimention" was based on the fact that the protagonist had entered a different, yet identical, world and the title phrase was even mentioned at the beginning parts.
The third one is a bit complicated: it was a recycled name of what is now "Nijitoki" (my drawings blog) that was based on Yukari's blog named "Tokimeki no Hibi" (ときめきの日々). I used Tokihi (トキヒ; originally 時日), but something doesn't seem right about the name and changing it was at a low piority. 時日 can also be read as じじつ to mean date/time. With the protagonist's charatistics more or less developed by now, I have decided on "苦境少女の心は深く泣いて", or "The heart of a troubled girl who cries deep in her heart", but that is obviously too long for the English title, so I re-looked at why I came up with that new Japanese name and came up with "Disoriented Feelings" for the English name. The old name is still visible in the tags and the URL prior to part 11 and it's first 2 specials.
For the fourth, I don't have anything to say other than that it's not fully established yet.
As for the other two (K-On!, The Story of a High School Student), they are not counted as my stories and are obviously based on anime.