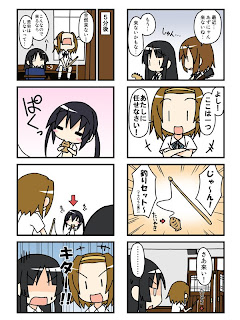 Anyways, here's a write-up of what I had seen through for the Spring 2009 anime. If it's a 11-13 episode series, it would be the entire thing, but if it's scheduled to have more, I would cover what I have already seen. Since I have dropped all the Winter 2009 anime, including "Sora Kake Girl", I won't be reviewing any of those.

Also, here's a review of other anime I had watched, but dropped or did not paid attention to:

I will be writing Summer 2009 anime soon, but seeing that I would be away from home for quite a while, and the limited time when I'm able to, I would try to limit on what to watch. Not to mention those 3 anime carried over from the Spring season. Also, I won't be doing as much as what I did for the Winter 2009 list with all those images, links, and timings on each TV station: I'm not in the mood for that.

29 June 2009: Hmm, on second thought, maybe I will not do it. I will still do the review of the recently-ended season and list upcoming anime on the main and anime blogs though.
anime