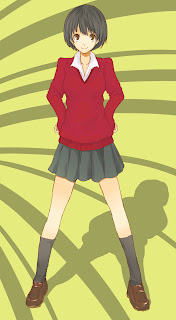 I know I had just recently published "An Unexpected Wish (Part 3)" just last week, but I can't really think of anything to write for it. "The Story of a North High Student", as you can tell, is not an original of mine, so I won't be continuing that. Part 15 of "An Original Story By Me" was written as the final (though I did feel that it is abrupt) as the timing seems to be the best to end at as finding out the truth and various events had already happened and can't really think of anything else. However, the storyline does coincide with the 2nd story (Alternate Dimension) which itself is closely related to the 3rd story (Tokihi).

Since I know how to write the 3rd story, that would continue on. I may write in a different perspective of any of my stories or expand/edit existing parts. "Alternate Dimension Part 1.1" is one such example. Since the 3rd story is closely related to the 2nd story, I would have a rough idea of what to write for the latter, but since the 3rd story is behind in the timeline, it may take a while. I should also avoid writing about cultural festivals as those have the most to write for a 1-day event, but can't be helped due to the relevance to the storyline. Time paradox/travel make things more complicated though...

I think the titles of the 1st and 4th stories should be swapped...
scheduled