June 03, 2013
Still recovering from the jet lag, I woke up early (5am) to explore the area and buy some toiletries that couldn't be brought though airport security. There was no 7-11 in sight, and stores did not open until 8am.

A lot of walking was involved: more than 12 hours of walking though the streets, and ignoring most of the red pedestrian lights. (They appear annoyingly frequent, and there was no warning before the green man turned into red.)

I went to the Louve to check out the place and did not go in (until day 5). I took pictures of the area and realized that there was a long queue (3 times longer in day 5) because of security checks and such. 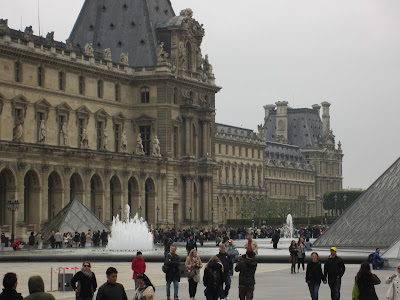 Following the wide open area from there seems to be a large park with many people, fountains,  and ducks. Following even further, we ended up at Chaps Elésee, and the triumph arch.
Really. That was all not planned or expected. The Eiffel tower could be seen from the arch.
So, what about food? Well, there was no convince store. Sandwiches were expensive. KFC was nowhere to be seen, MacDonald was more expensive than back home.
Well, the supermarkets we encountered were too small too have a large cold food section. I did saw a Carrefour while wandering aimlessly, but it was not yet open at that time and did not come across another outlet afterwards.

Bought some snacks, but they don't fill my hunger. There were bakery that sells the baguette for around €1. (The euro signs in French are written after the number. Euro-cent divider was either a comma or the euro sign itself in place of the dot.)

Then I stumbled upon a supermarket near were I stayed that sells nothing but (store branded) frozen food. It's cheap (by European standards), but stuff from Asia are expensive and packaged like some exotic food. (I saw a box of sushi selling for €12.) The fries I bought there for €1 per box had about 26 pieces and, after using the microwave oven, actually tastes quite nice. Shame I bought only 2 boxes.  Did buy other stuff though they were completely depleted by day 6.
Why the inconvenient operating hours?

On day 4, I did not went out until evening. I wondered around aimlessly again along river Sene, not too far away from the Louve.  There was an island in the middle of the river that is said to have been where Paris was founded, though, except for the nice scenery, there wasn't really anything there. There was also a bridge that was full of paddocks that said something about a woman's heart. I don't recall what exactly, but the sight of paddocks was mind blowing. (Oldest padlock I could find there out of the thousands I saw [of course i did not look through every single one of them] was in 2004, though the majority were from 2011 and 2012) 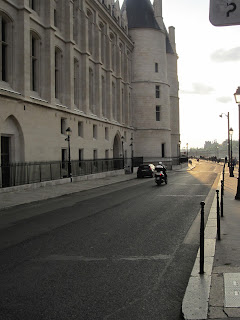 We wandered around further along the river until night has fallen. That happened at 10pm.
You wouldn't believe that a picture I took that appears to be daytime was at 8pm.
europe Paris trip
Location: Vincennes, Vincennes