June 04, 2013
For these two days, I visited two different museums: the Lourve (glass pyramid) and the Pompidou (building with pipes on the outside). Day 5 was the first Sunday of the month, so admission was free that day. However, that also meant that there are large crowds there.
So, I took a look at the area of the Lourve 2 days earlier where the queue was long. What caught me off guard? The queue that Sunday was 4-5 times longer! 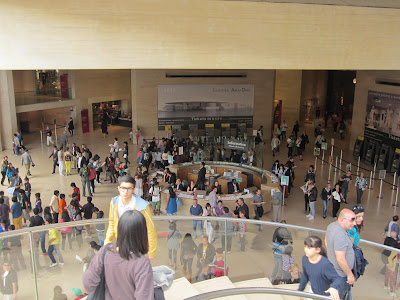 It took about 2 hours to clear it.

So what was inside there? A lot of ancient paintings and sculptures on display. It takes a whole day just covering one wing. You wouldn't believe how many people crowded around a particular painting armed with cameras. What is this painting in question?

Mona Lisa. Yes, it's the real deal, though you would be disappointed about its small size.
Actually, I visited to most of the other exhibits of that wing before heading there.
I then got hungry. However, the prices at the cafes are crazy high. It was a tough decision of leaving the place.

After eating, where to head next?

It seems that the museum at the Pompidou  is free on that day too. It is where the "more recent art" are on display. Was too tired and sleepy from waiting in line earlier, and left midway.
I did return the following day and continued where I left off, though had to pay the admission fee. I spent most of the day there until it was about to close (10pm), though I had just seen everything by then. 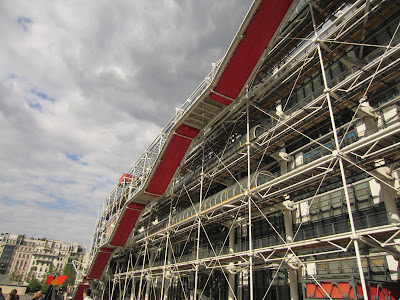